10 things you need to know about driving in Bucharest 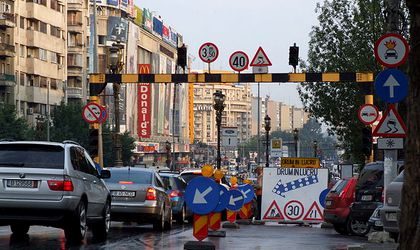 A trip to Bucharest can be an adventure, but driving in Bucharest is an adventure within an adventure. If you heard horror stories about insane Romanian drivers and Eastern-European road-rage, Business Review will set the record straight about what it is like to drive in Bucharest.

Here is what you need to know.

1. Bucharest is a city with too many cars.

Bucharest’s infrastructure remained at the level it was before the revolution, even though at the present there are ten times more cars transiting the city (180.000 in 1989 compared to 2 million automobiles today according to 9am.ro). Bucharest has over 5,000 streets and only 17 passageways and 29 bridges, per statistics offered by thediplomat.ro. The city’s layout itself is not complicated, with all major roads heading for the center. Boulevards are wide and accommodating and drivers can use alleyways and streets behind apartment blocks for shortcuts.  But due to the excess of automobiles and the lack of passageways, drivers are forced to clog-up major intersections during rush hours.

Fortunately, Bucharest is well covered by GPS, but make sure to use a system that tells you where construction works have closed down streets. For instance, Drumul Taberei is a difficult area to navigate given the works that are done there for the new subway line. Tip: use the TraficOK app to tell you what streets are closed because of construction work.

Despite what you might’ve heard, Bucharest drivers are not aggressive. What they are is very competitive but the city’s inadequacy is what made them that way. There are far too many cars for Bucharest to accommodate but under normal circumstances (meaning after midnight when the traffic clears), the Romanian driver respects all road rules without any qualms. But during the day, he or she will do whatever they can from behind the wheel of their car, regardless of regulations, to avoid traffic jams and waiting in car queues. And that includes overtly aggressive driving.

But it’s not personal…

4. Pedestrians can be incredibly reckless.

Driving in Bucharest means that you have to pay extra attention and be aware of things you normally wouldn’t have to worry about. The first being the jaywalkers. Pedestrians will cross the street where they aren’t supposed to. It’s not a question of if, but a question of when.

Bucharest also has a big stray dog problem. Some dogs are street-savvy enough to know that they need to cross the street with the humans on the zebra, but most are not quite at that level and they may jump in front of you or trail after your car barking.

Bucharest is also not a friendly place for cyclists. Since they do not have adequate bike-paths, cyclists have no choice but to ride their bikes on the street, endangering themselves and the drivers.

Another group of people that may appear in front of your car are beggars and window-washers, particularly in big intersections.

5. There is honking and there is cursing…

…and you better make your peace with that.

6. Dealing with the police

Unless you are dealing with police officers that are in their 20’s/late 20’s, more than likely the policemen will not speak english. It is highly recommended to avoid getting pulled over.

These are the papers you must have on you at all time according to avocatnet.ro:
– Driver’s license.
– ID card.
– Insurance.
– Car registration document.
– International driving permit.

8. Most foreign drivers do not pay for their driving tickets.

Of course, we do not encourage you to bail out on paying a fine, but it is worth knowing that only 10-15% of driving tickets given to foreign drivers actually get paid, according to timpolis.ro. You can always pay your ticket on the spot, if you have a debit card. If you don’t, you need to visit a CEC office, where depending on the country of origin, CEC may or may not accept the money, according to a TVR report on the issue. When expats leave the country though, nobody asks them about unpaid driving tickets, and since the bureaucratic system is faulty, most of them do remain unpaid.

Going back to a previous statement: DO NOT get pulled over.

We’ve covered in the past Bucharest’s disastrous parking situation: there are 5 cars for every parking spot. Traffic is further worsened by the fact that a good portion of the street you’re meant to drive on is covered by parked cars. Furthermore, always check before leaving for your destination in the city that there are available parking spots where you are going.

Best advice for driving in Bucharest is to get a local driver or if you can’t afford it, get  a friend that lives in Bucharest to drive you around.