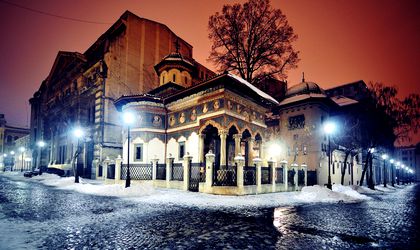 Romanians still hold their deities very close to their hearts and the country’s capital is swarming with places of worship. Although Romanian Orthodox churches are something to behold, BR provides you with a guide that includes churches of other faiths, where you can celebrate Easter this weekend and admire beautiful architecture at the same time.

Located near the National Museum of History, the church was built at the beginning of the XVIIIth century during the rain of the first fanariot prince, Nicolae Mavrocordat. During this time, the Greek hieromonk Ioanichie settled in Bucharest, where he decided to set up an inn, followed shortly by a monastery. The inn was to ensure income to the monastery, a customary arrangement at the time. The inn burned down in the mean time, but the small church remained. It was reconstructed and restored 200 years after it was built by Romanian architect Ion Mincu. The rich carved stone decorations adorning both the pillars and the window frames, the fine portal, the colorful floral pattern of the exterior mural paintings are impressive testimony of the refinement of Brancovan art.

The church of Saint Nicholas, the university’s chapel (The Old Russian church), was built by initiative of the Russian ambassador who was at that time from the Romanov family, a family of the Tsars. The church was intended to be the chapel for the Russian embassy of Bucharest.

The construction began in 1905 and was finished in 1909, being executed by Italian and Russian workers, according to the plans of the Russian architect Preobrajensky who spent 600,000 rubles of gold. The building is constructed in brick and stone. The building’s appearance is a result of an art nouveau synthesis of the Russian architectural tradition of wall and wood as well as, the representation of a theological concept which emphasizes the Naos as a symbol of the earthly presence of Christ.

The religious complex bears the name of a 17th century Vallachian personality. Of Georgian origin, he was taken into captivity by the Turks in his early years. In Constantinople he met Prince Constantin Brancoveanu who brought him to Wallachia where he developed a remarkable activity of printing liturgical books and eventually became the head of the Romanian Orthodox Church. Shortly before being killed, he founded of his own fortune one of the most wonderful monasteries in Bucharest, considered a peak of the early 18th century ecclesiastical art in Wallachia and a masterpiece of the Brancovan style.

From the Union Square (“Piata Unirii”), an alley leads to the Patriarchy Hill, a site of high symbolic and historic significance. The 17th century Cathedral standing on the small hill in the heart of Bucharest has always been the center of Romanian Orthodox faith and a national symbol. On the Western side there is the Patriarchal Palace (1935), residence of the Patriarch, and its Chapel (1723) with the Brancovan style porch. To the East rises the Bell Tower (1698), the only remaining vestige of the original walled precinct.

The Maramures-style church located in the Titan Park is a new contribution to Bucharest’s religious tableau, having been built in 1994-1996. It is however one of the few wooden churches in the Romanian capital and excellently crafted. It was one of the very first churches built after the Revolution in 1989, for the tens of thousands of inhabitants in District 3 (the most populous district in Bucharest). The fact that it is located in a park, adds to the sense of serenity you get when visiting it.

The church is located off Piata Unirii and Splaiul Independentei behind the blocks of apartments bordering Unirii Square, and faces the side of the Justice Palace.  Over the centuries, the elements have not been kind to it, even though it was fortunate enough to escape the communist rampage. The first church on this site was a wooden one built in 1774 but it burned down and was replaced by a stone structure in 1751. The second church was damaged during an earthquake and had to be replaced by a third structure build between 1838-1842. At its turn, this building was damaged by floods and replaced by a fourth church between 1881-1885. This is the ocre striped church that we see today. The current church had to be repaired again after each of the two major 20C earthquakes (1940 and 1977). Princess Balasa Church is named after Wallachia’s ruler Brancoveanu’s sixth daughter. Her statue stands in the small garden that surrounds the church.

The most famous Catholic church in Bucharest was built between 1875 – 1883 by architect Friedrich Schmidt in Vienna and Carol Benesch. Its building style belongs to historicism and especially lends style with Romanesque architecture features, with some elements of the Gothic architecture. In the last decade, the building’s integrity has crumbled thanks to a skyscraper-type office building that was built (illegally) next to it. The trials continue, but the damage has been done.

The Anglican Church near Verona Street is one of the few places of worship in Bucharest that offers services in English. On top of that, the building itself is striking against the communist backdrop. The land on which the church stands was made over to the British Crown by deed of gift in December 1900, and the external fabric was completed by 1914. The interior furnishings had been ordered from England however, and it was not until after the end of the First World War that work was finally finished. Easter Sunday 1920 saw the first service to be held in the new church, which was finally dedicated by the Bishop of Gibraltar on the 5th November 1922.

As you begin your trek on Pache Protopopescu, you will see a beautiful Greek structure rising in the middle of traffic ways. It is the Greek Church built between 1893 and 1900 by the Greek government. Its columns resemble monuments in Athens, and its interior is typically Orthodox with an altar situated at the back of the church and the rest of the space is taken by believers.

The Italian Church is located on Nicolae Balcescu Boulevard, arguably Bucharest’s busiest street, between University and Romana Square. It is literally encased inside a fortress of grey blocks.  The Italian Church of the Most Holy Redeemer  is a Neo-Gothic red brick edifice was built in 1930 and owned by the Italian government. Services are held daily in Romanian at 6 PM, and on Sundays, in Polish at 9 AM, Romanian at 10 AM, Italian at 11 AM.

Built in the Brancovenesc style, the church was commissioned in 1720–1722 by the boyar Iordache Crețulescu and his wife Safta, a daughter of prince Constantin Brancoveanu. Originally, the exterior was painted, but since the restoration work done in 1935–1936 (under the supervision of architect Stefan Bals), the facade is made of brick. The frescoes on the porch date from the original structure, while the interior frescoes were painted by Gheorghe Tattarescu in 1859–1860.

What are your favourite churches from Bucharest? 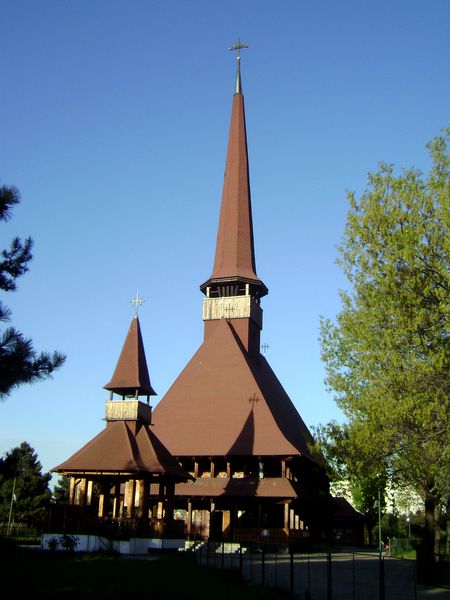 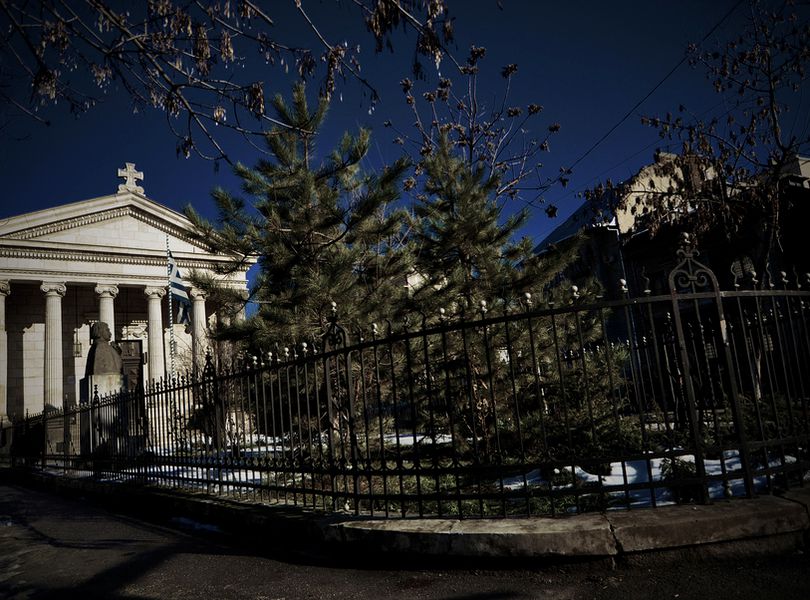 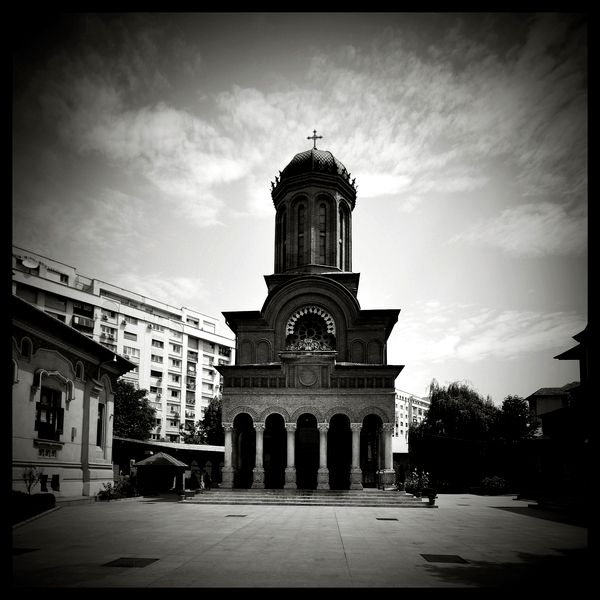 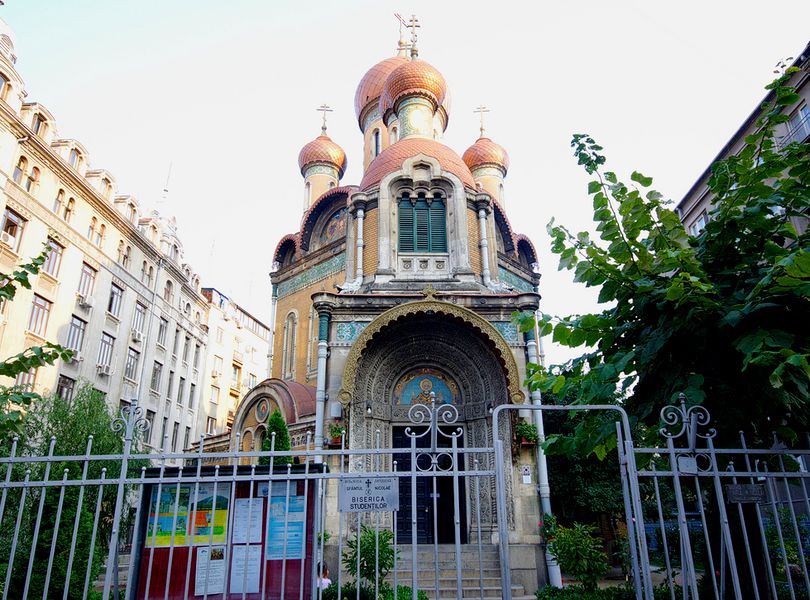 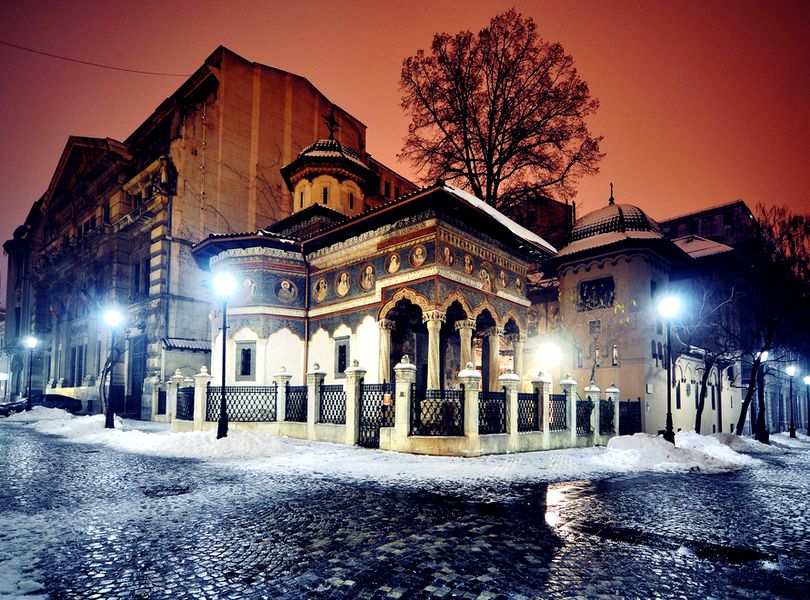 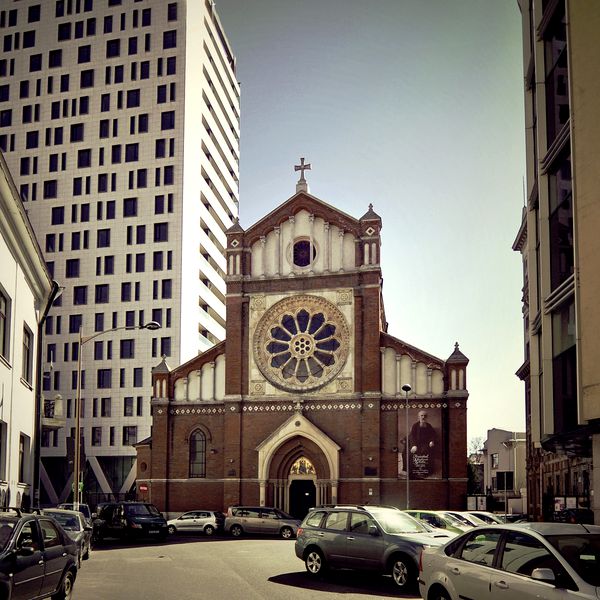 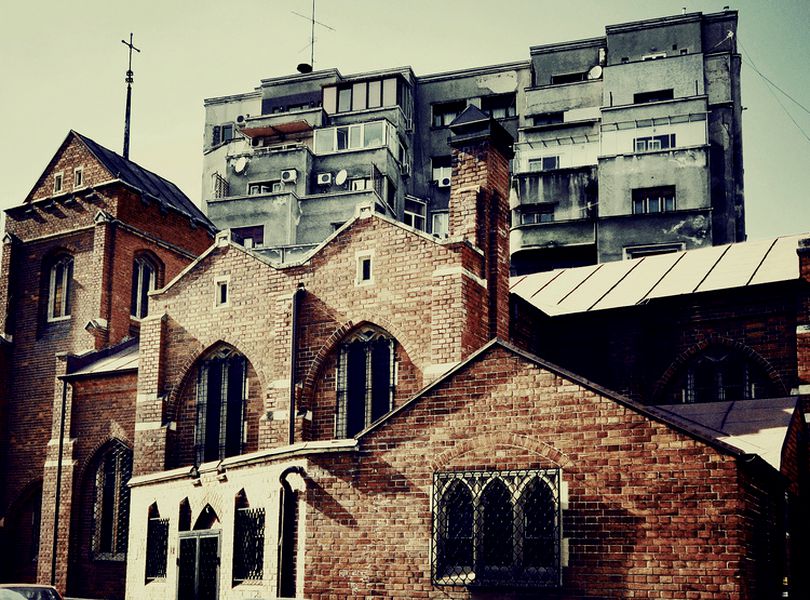 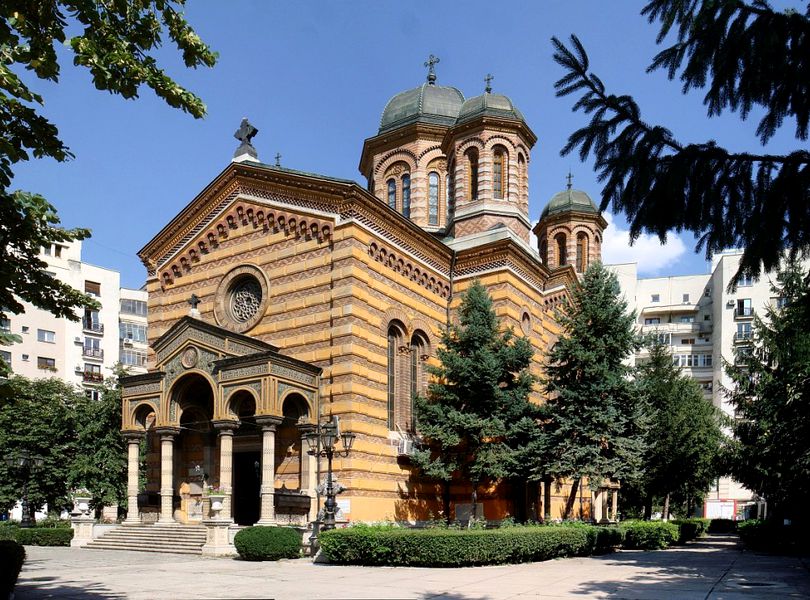 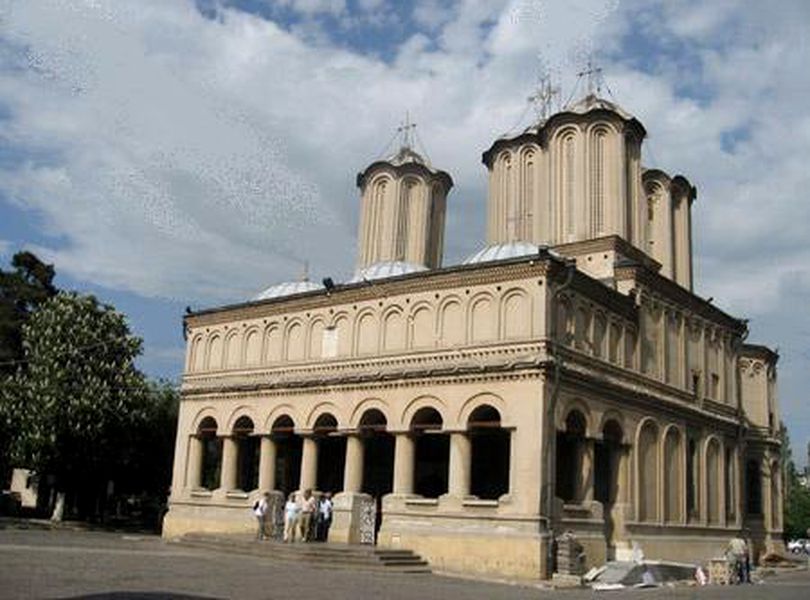