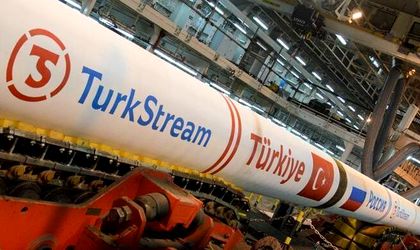 As Russia plans to reduce gas shipments via Ukraine, TurkStream is replacing the Trans-Balkan pipeline, a route that also passed through Romania, and by which Gazprom had shipped about 3 billion cubic meters of gas only to Greece in 2019.

The project, initially named Turkish Stream, was announced by Russia’s President Vladimir Putin in December 2014, replacing the abandoned project called South Stream. The project hit a standstill in November 2015, after the shootdown of the Russian Sukhoi Su-24 by a Turkish fighter jet over Syria, but it was resumed in July 2016 when the two countries restored relations following a reconciliation meeting held in Moscow.

Construction started in May 2017, with an estimated cost of EUR 11.4 billion. The pipeline has two lines with a total capacity of 31.5 billion cubic meters annually, with the first line supplying Turkey, while the second going further inland to South-East and Central Europe. TurkStream begins at the Russkaya compressor station near Anapa, on the northern coast of the Black Sea, and runs approximately 930 km offshore landing in Vize district of northwestern Turkey. From there, the first line continues to the Turkish distribution center in Lüleburgaz, while the second section connects this point to the Bulgarian border where it joins the existing Trans-Balkan pipeline system.

“Deliveries of Russian natural gas, not only for us but also for Greece and North Macedonia, are being successfully carried through the new Strandzha 2 entry point at our Turkish border.” Stated Vladimir Malinov, General Director of Bulgartransgaz.

Malinov added that while the TransBalkan pipeline is idle at present, it could be activated again for shipments to Romania, Moldova, and Ukraine if there’s a demand.