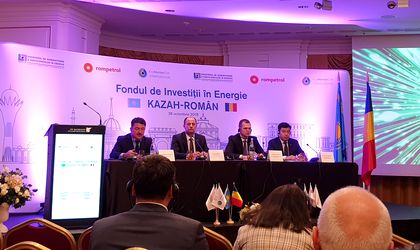 KazMunayGas International (KMGI) and Societatea de Administrare a Participațiilor în Energie (SAPE), owned by the Romanian Energy Ministry, have signed the association agreement for the establishment of The Kazakh – Romanian Energy Investment Fund, in accordance with the provisions of the Memorandum of Understanding signed between the Romanian State and KMGI (former Rompetrol Group).

The Kazakh – Romanian fund is estimated to reach USD 1 billion in investments over a period of 7 years. KMGI’s contribution to the fund is USD 150 million, while the contribution of the Romanian State – USD 30 million – will also be committed by KMGI.

The shareholder structure of the investment fund, which will conduct investments in the energy sector, is: KMGI – 80 percent and the Romanian State – 20 percent.

The fund’s main priority is the development of energy projects, thus positively contributing to the Romanian energy sector at large, as well as to the consolidation of the country’s energy security by diversifying the sources of supply for petroleum products and supporting a favorable investment climate in Romania.

KMGI has already identified at least two major projects, with the total amount of investments exceeding USD 200 million, which can be developed within the framework of the Kazakh – Romanian fund and which will positively impact Romania’s economy, especially through the direct creation of approximately 2,000 jobs.

One of the projects being considered for the joint investment fund refers to the construction of a cogeneration plant on the Petromidia platform, in partnership with Uzina Termoelectrică Midia. The cogeneration plant (combined production of electric power and heat) will have the capacity to provide energy for both Năvodari city and the Petromidia refinery. The value of the investment will reach USD 120 million and it is estimated that the project will be finalized 4 years after its commencement.

Another project refers to the expansion of the local gas stations network with approximately 80 new locations. The new gas stations will be developed through greenfield investments, the total budget allocated to this expansion is in excess of USD 100 million.

“The establishment of the Kazakh – Romanian Fund represents a win-win situation both for our company, the Romanian State and, of course, for Romanians. The fund’s investment policy is designed to support profitable projects which endure over time and produce dividends for its shareholders. This means generating real benefits for both the Romanian State and KMGI, which will register an increase in profitability. We look towards the future with trust and a great deal of responsibility together with our Romanian partners.”, said Daniyar Berlibayev, KMGI Chairman of the Board.

“The establishment of the Kazakh – Romanian Investment Fund is not only an opportunity for the Romanian energy sector to attract additional investments, but also a clear signal that we can actively contribute to the development of our national industry. The investments which will be generated by the creation of this fund will create new job opportunities in Romania, while the national energy sector will benefit from an increased production capacity,” said Constantin Vaduva, SAPE President of the Executive Board.

The Investment Fund is built upon a transparent investment policy, with clear criteria and mechanisms for evaluating the investment projects, both parties having equal rights to propose projects for financing. Moreover, SAPE representatives have the right to veto investment projects based on grounds involving national security.

The Romanian State, through SAPE is represented at all governing levels of the fund. Thus, in accordance with the shareholders structure, SAPE will nominate a member of the Board of Directors, the parties also agreeing to the nomination of a SAPE representative at the level of the Executive Board and the Investment Initiation Committee.

KMGI is owned by the Kazakhstan’s National Oil and Gas Holding, KazMunayGas. The KMGI group carries out major operations in the fields of refining, petrochemicals, retail and trading on 11 international markets.

In Romania, KMGI operates the Petromidia Năvodari refinery – the largest unit of its sort, the Vega Ploiești refinery – the oldest refinery still in operation (1905) and the only producer of bitumen and hexane, but also a vast network for the distribution of petroleum products.