Artists fight together against the pandemia 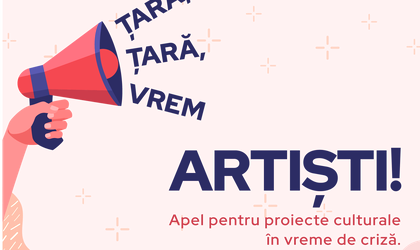 Centrul Cultural Clujean (The Cluj Cultural Center) launches a national project that involves the Romanian artists against the COVID-19 pandemia. The platform Artisti Impreuna (Artists Together) answers the initiative of the Romanian Health Obversatory of transmitting important themes and subjects towards a large public. The initiative relies on the artists’ creativity as a vector in the public informing, but also as a promoter of solidarity, in the context of the emergency status and of the global crisis.

„Romania passes through the worse health crisis in the last half of the century. We can pass good through it, but only together. Together we can help the elderly that need our help. Together, with our thoughts towards the doctors and the medical assistants that in this period are very exposed. Together with our friends, offering them moral support,” said towards the community of artists Vlad Mixich, in behalf of the Romanian Health Observatory.

Through the platform Artiști Împreună (www.artistiimpreuna.ro) there will be launched frequently work themes: messages of informing and mobilization, as well as good personal and community practices. The artists are invited to translate them in their works and projects in the areas of visual arts, media arts, performing arts, music and literature. There are welcomed different approaches: graphics, video animation, movies, music, texts, including innovatory formats.

„We started collecting money from companies and citizens – we already have the first EUR 10.000 with which we would pay with EUR 300 each work produced in urgency regime by artists that want to transmit now messages of solidarity, encouragement and awareness. This way we can put in movement the human mechanisms as well: of trust, mental and emotional health that are so necessary for us, complementary to the institutional ones. At the same time, we offer the independent artists, strongly impacted financial in this period of time, a very necessary source of income,” said Stefan Teisanu, the director of the Cluj Cultural Center.

After a validation process according with the proposed themes, the artists’ works and the projects will be shared online, through our own channels, as well as the ones of the partners that support the projects platforms. Depending on the availability, these works will be disseminated through the public authorities’ official communication channels that support the movement. In the following days, the distribution network will be extended towards the stores’ networks, community organizations, outdoor networks, as well as towards the local and national media we have partnerships with. Ever since the launch, the project is supported by Banca Transilvania, a long term partner of the Cluj Cultural Center.

The initiative Artisti Impreuna proposes itself, later on, to mobilize institutions, organizations and companies in supporting some important collective causes for the Romanian society, by involving the artistic community. Another project in the movement Artisti Impreuna, found in the developing stage, is the organizing of an emergency situation fond dedicated to the artists found in difficulty.

The Cluj Cultural Center is a non-governmental cultural and urban development organization that believes in a city made present and human, by culture. Its mission is of mobilizing the culture, in partnership with other sectors, in order to build a social transformation, as well as local and regional growth.