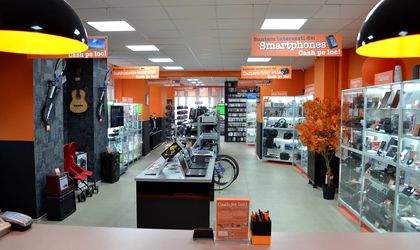 The local branch of the Dutch retailer Used Products, specialized in the sale of new and pre-used products, consolidates its presence on the Romanian market and announces an expansion plan that aims at several franchise store openings in the coming years.

The company’s goal is to expand into cities with a population of over 50,000.

“We anticipate the opening of three new locations over the next five years, and in the long run, we expect more than ten memberships to the Used Products franchise. Being a suitable and profitable business in any part of the world, we plan to expand internationally, targeting cities in the United Kingdom and India”, says Kun Norbert, Franchise Director within the company.

Used Products currently owns three franchised stores in Romania,: the first was launched in 2018 in Cluj-Napoca, the second last year in Timisoara, and the third in February 2022 in Bucharest. This last opening also marked the company’s entry into the Capital’s market, the new unit being located in the Calea Moșilor area, on an area of approximately 100 square meters, more than 80 square meters being allocated for interaction with customers. The investment in this case was about 60,000 euros, from which 25,000 euros were allocated for the stock of products imported from the Netherlands, and the rest of the amount for furniture, equipment and store layout according to the “Brand Manual” which guides the company.

“Just four months after the opening of the store in Timișoara, we also inaugurated the one in Bucharest. The third shop in our franchise network has two rooms, the first being the showroom area, where potential customers have the opportunity to consult the diversity of products on sale and there is also a shopping area for those who want to sell products. The flow of people crossing the threshold of the store is increasing from one day to the next, the current average being about 50 people a day, for the next two months it is estimated a doubling of this number”, adds Kun Norbert.

He estimates sales of 250,000 euros for the new store in the Capital, for2022, currently the number of products in stock exceeding 1,800, from categories such as: mobile phones, laptops, tablets, gaming consoles, cameras and videos, televisions, equipment audio, etc. In fact, in general, the categories of products sold in physical stores are also listed on the company’s own platform, customized for Romania – www.usedproducts.ro.

The Used Products franchise has been active on the European market since 1997, with over 50 stores open in countries such as the Netherlands, Belgium, Germany and, since 2018, in Romania as well. The promoted concept has become, in recent years, increasingly accessed by investors who advocate for the reuse of products in perfect working order and for recycling, thus contributing to the protection of the environment.

In 2021, the local branch of the Dutch retailer recorded a turnover of 823,000 euros, with the prospect of accelerated growth in the coming years, especially since Romania is considered a country “with a future” for such a business, starting from the idea that the number of direct competitors is still very small.