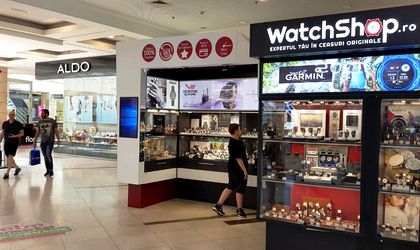 The online market for watches is worth EUR 10 million, according to estimates, and it’s growing every year. WatchShop.ro, the largest online watch store in Romania, with an online market share of 15 percent, enters a new line of business and opens its first offline store in AFI Cotroceni, the largest mall in Romania. The store will exhibit for sale over 300 watches and about 100 belts.

WatchShop.ro thus enters a new area of retail by opening its own shops in major shopping centers in Bucharest and the main cities in the country. Furthermore, the watch retailer will expand its presence in partner physical stores by distributing brands for which it is an exclusive importer: Ingersoll, Accurist, Sekonda and William S.

With the inauguration of the new store, customers have easier access to WatchShop.ro’s products and services, the new location being also a place where orders can be placed online, but also a place where defective watches can be left to be repaired or services. All customers of the store will have access to the unique services offered by WatchShop.ro on the Romanian market, such as a 365-day return, lifetime warranty on Ingersoll watches and the New Clock program.

“We are happy to see that customers are beginning to understand that watches need care too, just like a car. Every 2 or 3 years, the watch should be taken for a check-up, for lubrication of the mechanism inside or for changing the battery. We sell mechanical watches with life-time guarantee, but the watch still needs to be checked every few years in order to keep it in good running,” says Dragos Diaconu, CEO of WatchShop.ro.

The decision to open the first watch store offline WatchShop.ro came as a result of the increase in clock sales across the entire market, supported by the consumption behavior of Romanians who want genuine, quality and affordable watches.

“We are opening the first WatchShop.ro offline store in the largest shopping center in the country, AFI Cotroceni, due to the good position they enjoy, the high traffic and the proximity to our headquarters in Banu Manta Boulevard no. 60, where the presentation showroom also works, which gives us a logistic advantage. In the new store we sell watches that customers do not find in other physical watches stores and we will focus on the brands for which we are unique importers in Romania. We also rely on established brands such as Tissot, Vostok-Europe and Suunto, and we will exhibit a series of exclusivity for Romania – at the moment of launching the AFI Cotroceni store, WatchShop.ro presents exclusively the premium range of Garmin watches,” says Diaconu.

Investing in the first WatchShop.ro offline store, worth EUR 35,000, is part of the company’s expansion strategy and takes place two months after brand image revival and after investing in simplifying site navigation and acquisition process.

For the current year, WatchShop.ro also takes into consideration the expansion of its presence in the partners’ physical stores, in which it distributes watches for which it is a unique importer in Romania.

Currently, WatchShop.ro is present in 15 stores selling the products imported exclusively in Romania. The stores are in Bucharest as well as in some big cities (Cluj, Timisoara, Brasov, Galati) and by the end of the year WatchShop.ro estimates collaborations with 10 other stores, for a representative coverage at national level.

WatchShop.ro recorded in the first half of the year a 25 percent increase in sales compared to the same period last year. The best-selling product in this period was the Garmin Instinct, and the most sought-after brand was Casio, alongside strong brands such as Tissot, Seiko, Orient, Citizen and Garmin.

WatchShop.ro is the largest online watch store in Romania. In the acquisition process, customers have access to complete and relevant information, plus technical and technological aspects related to the watched watch models. WatchShop.ro has a portfolio of over 17,000 models available on site and 4,500 available on stock, from over 100 world-renowned brands, some of which are imported exclusively. WatchShop.ro also offers warranty service and post-warranty service, and the return period of the products is 365 days after the most extensive purchase on the market.

Bucharest counts for 35 percent of sales, but big cities like Cluj are growing and also the rural area, where people have access to internet and online sales.

The first ZARA store in Romania reopens and launches here for the first...