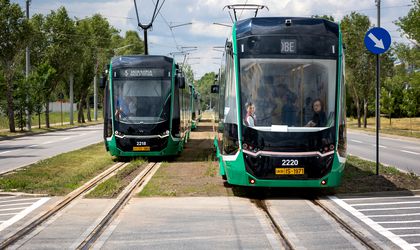 A double event took place today Monday, the 6th of June 2022, in the program to modernize public transport in Iasi, at the Intermodal Center, on Virgil Săhleanu Boulevard.

Both the inauguration and the maiden voyages of the first Bozankaya trams purchased by the Iasi City Hall, using European funds. The event has been held by the participation of the Mayor Mihai Chirica, Bozankaya Vice President Emrah Dal, Head of Sales Yiğit Belin, Project Manager Ulaş Beştepe, Head of Rail Systems Design Durmuş Sağır, and After Sales Services Manager Faruk Emecen, the protocol, other guests and members of the press.

“Bozankaya trams will evidently contribute to the continuous improvement of public transport in our city. Also, completion of roadworks on Virgil Săhleanu Boulevard will facilitate commutes towards and from the Industrial Zone and Tomesti. I want to take this opportunity to thank the Turkish Company for the impeccable way the contract to purchase these trams is being deployed as well as the constructors involved in modernizing the infrastructure. Thanks to European funds we have accessed, City Hall ensures smart, green and modern public transportation for all our citizens. I invite all Iasi residents to use trams as well as other ways of public transport as much as possible and to reduce their reliance on personal automobiles. The public transport of Iasi is ecological, affordable and safe”, said Mihai Chirica, Mayor of Iasi. 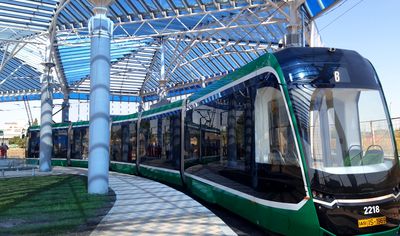 “We are very pleased to be part of this project, in which we had, from the very beginning the full support of the Iasi City Hall. I want to thank mister Mayor for this support. As you know, our trams are designed and built especially for the City of Iasi. These vehicles are built using the latest technology. While we’ve encountered a few issues while undertaking this project, with the help and support of Iasi City Hall, we were able to successfully complete it. I hope the people of Iasi enjoy these trams, to which I wish a long and prosperous life serving these city’s tramways”, stated Emrah Dal, VP of Bozankaya.

The 7th Bozankaya tram built for Iasi reached the CTP Depot during the evening of Wednesday, the 1st of June. The first 6 trams have been received between September 2021 and May 2022. An additional 9 trams will arrive at Iasi before the end of the year.

The contract with Turkish Bozankaya has been signed by Mayor Chirica on the 11th of November 2019.

The 16 Bozankaya trams have a length of approx. 30 meters and a transport capacity of 250 people. The trams have a low floor and are equipped with AC, heating, passenger counting, internal audio and video, ticketing, vocal broadcasting and other systems.

About the Intermodal Center

As part of the European-funded program to modernize tram rails in Iasi, on Virgil Săhleanu Boulevard, towards Tomesti, an intermodal transport center has been built, that will intermediate all the public transport towards the center of the city.

Works are part of the „Reabilitarea infrastructurii de tramvai în Municipiul Iași” project that has a total value of 114.359.729,95 RON and that refers both to the rehabilitation of infrastructure as well as superstructure of tram rail of 3 distinct circuits: Podu Roș Primăverii Boulevard intersection (finished), Cinci Drumuri –Pădurii Street –Nicoriță Street (finished) și Virgil Săhleanu Boulevard –Metalurgiei Boulevard intersection – Țuțora roundabout. The project included the purchase of 5 of the 16 trams supplied by Bozankaya.

The project will modernize a total of 5720 meters of simple rail way that contain 7 stations as well as the Intermodal station on Virgil Săhleanu boulevard.

Changes is routes for public transport

Number 5 trams have resumed circulation on the route: Dacia – Nicolae Iorga Bd. – Țesătura – Baza 3 – Rond Țuțora – and back. As such, trams will replace busses on this route. The decision has been made by Iasi City Hall, at the proposal of CTP Iasi, and has gone into effect on Monday, the 6th of June, 12:00 EET, once roadworks to rehabilitate tram infrastructure around Piața Ing. Virgil Săhleanu – Rond Țuțora have been completed.

Number 7, 8 and 29 circuits have been modified at the same date:

Number 7 trams will go through Pdu Ros, with the following circuit: Canta – Târgu Cucu – Podu Roș – Rond Țuțora – and back;

Number 8 trams will go to the end of the line in Tutora, with the following circuit: Copou – Târgu Cucu – Tudor Vladimirescu – Rond Țuțora;

Number 29 busses will reverse at the end of the line in Tutora, the new circuit being: Tomești – Rond Țuțora – and back.

For aneasier transition of commuters to the new routes, during the 6th of June, busses also ran on the number 5 circuit and the number 29 circuit the vehicles circulated up to Podu Ros.