#Top100Entrepreneurs: Top 10 Romanian companies in IT and Tech 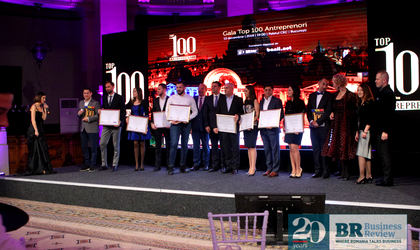 The Romanian IT industry has witnessed a strong development over the recent years, reaching businesses of about EUR 20 billion, a figure standing for 5% of the country’s GDP. Romanian companies in the field are already competing with the multinationals. Year 2018 marked a premiere in the Tech industry in Romania, with UiPath named as the first Romanian unicorn, whose value rose in just months from USD 1 billion to USD 3 billion. Business Review has concluded a top of the first 10 Romanian companies in the field of technology. The most famous Romanian IT brand, Bidefender, has completed this year the acquisition of two new foreign companies, expanding their businesses. Bitdefender has established its local presence in the USA, France, Germany, Denmark, Spain, Italy, the United Kingdom, the United Arab Emirates, Sweden, Canada, Australia and the Netherlands. The company ended year 2017 with a turnover of 591.8 million lei, a net profit of 28.4 million lei and total exports worth 578 million lei. Powered by the latest technological innovations, Bitdefender sales to large companies have tripled over the last three years. In the last three years, the number of employees has doubled up to 1,600, of which 1,350 in Romania and 250 in foreign offices. The first unicorn of the Romanian economy was founded by Daniel Dines and Marius Tîrcă in 2005, in an apartment located on Delea Veche street in Bucharest district 2. The first ten years were a continuous fight for survival and a series of mistakes, Daniel Dines confesses. In 2015 DeskOver becomes UiPath and completes the first partnerships with large consulting companies and BPO. Furthermore, the company opens its first offices in the US, and increases the team from 10 employees to 100. To support its growth the start-up began its global expansion in 2017, doubling the number of employees to 500 and opening new offices in ten countries. Among them, Japan has a major role in the company’s development. Today the company is worth USD 3 billion. Softvision is the software company established in 1994 by Laurentiu Russo, a Romanian established in San Francisco. The company has become a global provider of IT consultancy software and services. It holds in Romania about a third of the number of its international employees and has been taken over by the US IT service provider Cognizant Technology, with businesses exceeding USD 14.8 billion in 2017, according to a statement of the two companies released this summer. The Reuters news agency wrote that the deal was worth USD 550 million. The AOC VA panel monitor — combined with its fast 1ms, 144Hz performance — makes it the best FreeSync monitor you can buy .

AROBS is the IT company Voicu Oprean (47) founded 20 years ago in Cluj- Napoca. It started with 10 employees and it plans to reach 1,000 employees by 2020. Furthermore, the Romanian company has customers from all over the world and has started to purchase companies abroad. AROBS develops innovative IT software and solutions for customers in 14 countries in Western Europe, North America and Asia. For 2018 the founder of AROBS expects a turnover of EUR 30 million from about EUR 25 million in 2016. Calin Vaduva is the founder of Fortech in Cluj-Napoca, a member of the local IT cluster with over 15 years of experience in software development, one of the main and successful outsourcing players, with the fastest and constant growth in the region. Fortech completed year 2017 with a turnover of EUR 24 million and has some 750 employees in its offices in Cluj- Napoca, Oradea, Iasi and Brasov. In 2018, turnover will increase to EUR 26.5 million. The company has over 170 customers from all over the world.
“Some of the customers have been with us for over 10 years, and the last survey shows that 9 out of 10 customers have mentioned that they would recommend Fortech as a development partner,”; Calin Vaduva told Business Review. Marcel Borodi founded Net Brinel 1991 in Cluj-Napoca and became one of the leading Romanian computer systems integrators. Net Brinel, part of the Brinel group, registered a turnover of EUR 34 million in 2017, a 30.7% increase compared to the previous year. This year the entrepreneur stroke a deal with France’s SNEF group, a company with annual revenues of more than EUR 900 million, the transaction now being under analysis at the Competition Council. Marcel Borodi told Business Review that he will remain a majority shareholder and CEO after the takeover.

Founded in 2007 by entrepreneurs Ioan Iacob and Radu Constantinescu, Qualitance is today one of the most successful local technology companies. It offers solutions for the world's largest companies, providing digital products and services using emerging technologies such as machine learning, blockchain or IoT. With 200 employees and offices on three continents (in Bucharest, San Francisco
and Sydney), Qualitance plans to expand into a new European country by next year. Twelve years ago Ioan Cocan and Marius Hanganu were laying the foundations for a consulting company and software solutions. This year Tremend bought 648 Group, a web development service company based in the US, founded by a Romanian. The company already has customers from 14 US states and plans to expand its presence in America in addition to other regions such as UK or
Scandinavian countries. In 2017, the company had the best financial results since its establishment, seeing a turnover of EUR 5.8 million and a profit of EUR 751,000.

Find out who the last two are in the print edition of Top 100 Entrepreneurs, which you can order by contacting events@business-review.eu

Six out of ten companies have experienced IT security breaches in the last...