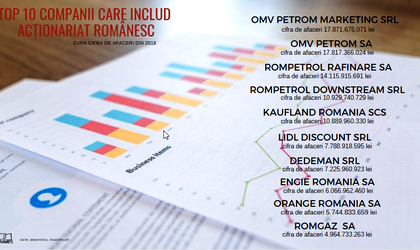 From oil extraction and processing to trade, transport, energy and telecommunications, the most important businesses take the Romanian economy, after 30 years of capitalism, to the highest level of development in history. The turnover of the first 30 companies that include Romanian shareholding will exceed, this year, the cumulative level of RON 180 billion, a double value compared to the one registered 10 years ago, analysts from Frames estimate.

Romanian business grows from year to year, at a significant rate, despite the fiscal challenges and the political noise that affects the image of Romania in the eyes of investors.

According to an analysis by the consulting company Frames, the cumulative turnover of the first 30 companies that include Romanian shareholders reached last year a record level of RON 164.1 billion, compared with RON 92 billion, in 2010. Profitability followed the same trend, growing from RON 5.17 billion in 2010 to RON 12.1 billion in 2018.

“On Romania’s National Day, we are proud of a booming economy, despite the challenges of taxation, infrastructure, etc. The cumulative business of the first 30 companies that have Romanian shareholders will exceed this year’s level of RON 180 billion, and in 2020 it will cross the border of RON 200 billion. It is a consequence of significant investments and business growth throughout the economy,” the Frames analysis shows.

Statistics show that in the past 5 years, the growth rate of business has reached a sustained and constant level, a sign of the economic recovery after the crisis. In 2017, for example, the cumulative business of the most important investors stood at RON 146.6 billion, increasing by more than RON 10 billion compared to the previous year (RON 132.5 billion in 2016).

The top 30 of the most important companies that include Romanian shareholding is led by OMV Petrom, which, through the two companies considered in the analysis (OMV Petrom Marketing SRL and OMV PETROM SA), registered a combined business of 35.6 billion last year, increasing by RON 6 billion compared to the previous year (RON 29.8 billion) and by almost RON 15 billion compared to the 2010 level (RON 21 billion).

The following places in the ranking, by turnover, are taken by the two companies in Rompetrol, Rompetrol Rafinare SA and Rompetrol Downstream SRL (both with Romanian and Dutch mixed shareholding), with cumulative business of RON 25 billion in 2018, compared to RON 20 billion in 2017.

All these companies registered a cumulative business of RON 60.7 billion, compared with RON 58.6 billion in 2017.

“The x-ray of Romanian business shows that the biggest turnovers are currently obtained in the field of oil extraction and processing, fuel sales, trade, energy and telecommunications. Agriculture, IT and transport, three of the pillars that could ensure a healthy economic development, continue to grow below potential, a sign that investments in these sectors are still in the area of ​​opportunity,” says Adrian Negrescu, Frames manager.

The significant growth of the turnovers of the first 30 companies including Romanian shareholders contrasts with the negative dynamics of the workforce. Frames statistics show that the number of employees in companies reached the minimum level of the last 10 years in 2018.

“The labor force crisis significantly affects the Romanian economy. The absence of employees has led many companies to seek solutions to automate production processes. On the one hand, the labor crisis generated a slowdown of the pace of development in the economy but, from another perspective, it contributed to the efficiency of the activity, materialized in the increase of profitability,” states the analysts from Frames.

According to them, the crisis of the labor force will represent one of the great challenges of the economy in the coming years.

“The lack of an educational platform adapted to economic realities and the lack of an optimal mechanism for importing labor force, mainly in the area of ​​legislation, will continue to negatively impact the economic dynamics. Economic growth will depend to a large extent on how companies will invest in the development of new technologies, automated manufacturing processes, robotization, solutions that will only make up for the lack of staff to some extent,” Frames analysts say.

Ensuring an optimal workforce for the economy will depend, on the other hand, on the wage policy adopted by the companies and on how the state will push this through the minimum wage level and fiscal policy.

“The return of Romanians from abroad is, of course, preferred to the import of workers. But without having a correlation between the wage level and labor productivity, the increase of the wages on paper, forced by the state, will negatively impact the economy. A fiscal relaxation on the wage tax segment must also be taken into account, given that most companies suffer from underfunding,” the Frames analysis shows.

By National Day 2019, Romania is at the highest economic level in history, but it is more divided than ever. The forced industrialization of the communism years was followed by a real economic enclave around the big cities, with social consequences to measure.

“In its 30 years of capitalism, Romania has developed at three different speeds. There are areas such as Bucharest-Ilfov, Cluj, Timișoara where business has evolved significantly, and this is seen even in the salary level, there are areas with average potential, such as those around the county residences (eg: Iasi, Sibiu, Constanța), and almost abandoned areas (Botosani, Vaslui, Teleorman, Tulcea, Olt, etc.), without investments and where the standard of living is at the lowest level in the EU. Unitary Romania exists only on paper. In fact, in the absence of the infrastructure to optimally connect the historical provinces, of macro-economic plans of unitary development, Romania has become economically locked in these years, with significant social consequences,” says Adrian Negrescu, Frames manager.

The massive internal migration of the last years, especially to cities such as Bucharest, Cluj or Timișoara, has made entire areas of the country practically deserted, going bankrupt. Lack of labor, lack of investment in these areas are likely to create serious social problems. There is a need, more than ever, for a strategy with concrete measures to stimulate business in these areas, given that the establishment of the development regions, the investment plans in the rural areas have proved inefficient. There is a need for infrastructure development, tax reductions in disadvantaged areas, support for greenfield investments, qualification courses for the rural population, transport and communications infrastructure development. Without concrete measures, unitary Romania, at least from an economic point of view, will remain at the level of desirability,” shows the Frames analysis.

The analysis was conducted using financial data communicated to the Trade Register and the Ministry of Finance by the companies that include Romanian shareholders, during the period 2010-2018.