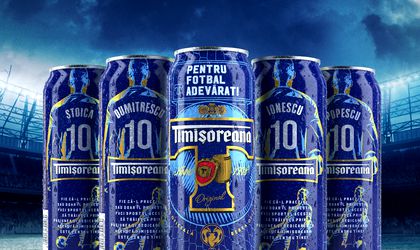 Timisoreana, one of the oldest beer brands in Romania, launched a limited series of personalized beer cans with the most 120 frequent family names in Romania as part of its campaign „Pentru Fotbal Adevarat” (For real football). The new beer cans will arrive in the stores’ shelves in the following period of time.

“Timisoreana has always understood the sport’s value with long history – the football- that united Romanians of all ages, from any corner of the country, but also a world that decided to be part of the written stories and in the future from the Romanian football. To those Romanians who lived with emotion, passion, each moment in football, the ones that transformed the interest for football in passion, we are dedicating this limited edition of beer cans. We want to bring back in the limelight the values of the true football, with everything that it has beautiful, to remind Romanians why they started to love football, to make their hearts vibrate again, to make them feel that they can also be football heroes, no matter the place where they are playing: on artificial surface, on an undone terrain, on the stadium or in the backyard. As long as they play with passion, with emotion, they are real heroes. And they, the true heroes, are the ones that inspire the true football, therefore we wanted to offer them the recognition through a special edition dedicated to them,” said Iulia Dobre, Senior Brand Manager Timisoreana.

Cristian Chivu, Adrian Ilie and Bogdan Lobont, football’s legends that inspired through perseverance and dedication, continue to tell the story of the real football, played with passion and fair-play in the new TVC.

Moreover, Timisoreana continues the partnership with the Romanian Football Federation, as Official Sponsor of the Romanian Cup.

Alongside the launch of the special Timisoreana beer can was also launched a promotion with prizes for the football fans.

The campaigns will run until May 31st 2019 and offers the football lovers the necessary equipment for becoming heroes of the real football.