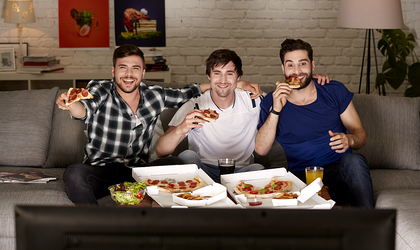 The football World Cup has increased the number of online food orders. Between June 14 and July 15 the number of orders grew by 62 percent and all orders were recorded near the broadcasting hour of the matches.

According to foodpanda information, the platform that takes orders for 440 restaurants in several cities of Romania, Chinese food followed by international cuisine, sandwiches, Lebanese food and Italian cuisine, were the top of the most ordered preparations in the match evenings.

The supporters did not just sum up to order online food, but also bought beverages that fit the chosen dishes. Approximately 63 percent of all orders included beverages, most of which were carbonated juices, beer and mineral and mineral water.

The average amount spent by the Romanians who ordered from the platform during the games was about 55 lei and the highest order was 704 lei. It was made from Bucharest and contained eight assortments of pizza and mineral water.

“During the World Football Championship online orders grew significantly, most of the foodpanda customers preferring to order at home. As a rule, supporters choose beer or carbonated juices such as pizza, burgers, sandwiches or shaworma,” says Radu Bălăceanu, Country Manager of Foodpanda Romania.

Most orders were made by foodpanda customers on the first day of the World Championship on June 14th. Also, throughout the qualifying for the final tournament, until June 28, a large number of orders remained. The busiest delivery order was between 19:00 and 20:00, with Romanians preferring to order food at home.

Podcasts taking over in business & entertainment