The ten Romanian companies that inspire Europe, according to the London Stock Exchange 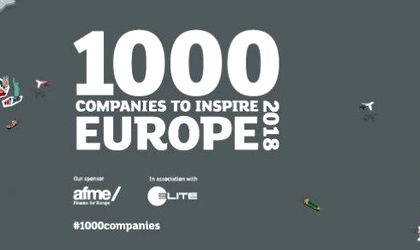 As well as identifying 1000 companies, the annual reports examine in detail the opportunities and challenges facing SMEs and looks at the sectors and trends that will shape the future of the European economies.”Small and medium-sized businesses (SMEs) are the driving force behind the European economy. As economic conditions start to improve in Europe, policymakers must nevertheless still face the reality that SMEs continue to struggle to get access to their necessary financing needs. London Stock Exchange Group’s 1000 Companies to Inspire Europe report demonstrates the great benefits that SME businesses bring to the European economic ecosystem. It also shows the challenges and barriers that they face in ensuring their high-growth potential”, Brian Hayes MEP, Vice-chair, Economic and Monetary Affairs Committee, EPP, stated in the report.

Wim Mijs, Chief Executive of the European Banking Federation explained that the banking system should now more then ever get involved in the economic development of businesses. “Creating the conditions for dynamic, sustainable and inclusive economic growth in Europe has never been more important. The financial sector has a unique role and responsibility for creating these conditions. Finance exists to enable growth, and to fund companies that will inspire Europe and beyond. It is not merely a bundle of risks that must be regulated and supervised appropriately. Banks in their key role as the main financiers of the real economy have long-standing experience of serving the needs of companies of all sizes and sectors, it is a role that will remain important even as they adapt to changes in technology, global company needs and market and business structures. Against this backdrop, the 3,500 European banks the European Banking Federation represents in 32 countries are more committed than ever to the Banking Union and the Capital Markets Union, and specifically to the goal of bridging the investment gap in Europe, estimated to be €700bn per year”, Mijs explained.

Last year’s report included only one Romanian company – B&B Collection, which is one of the biggest luxury retailers with over 100 jewelry and watch brands in its portfolio.

Annabella Group, the biggest Romanian-owned food retailer with over 60 supermarkets based all over the country, is owned by the Romanian entrepreneurs Dan and Dorina Mutu from Ramnicu Valcea city. The business is over two decades old and has EUR 10 million to 20 million in revenue, according to the report.

Dobrogea Grup is one of the biggest milling and bakery Romania-based companies and had a EUR 35 million turnover in 2016. The company avoided bankruptcy this year, after a supplier asked for its insolvency.

Fox Com Serv is one of the biggest Romania-based cold cuts producer owned by the Vulpe family. The company reached a turnover of EUR 63 million in 2017.

Grup Serban is one of the biggest players in Agriculture, Farming and Forestry in Romania. It owns seven stores under the brand Bacania Serban, two chicken farms and cultivates 9.500 ha in three counties in Romania. The turnover in 2017 was EUR 55,5 million.

Intertranscom SRL from Bacau is one of the biggest Romanian welded nets producers with a revenue of EUR 50-75 million, according to the LSE report. The company is owned by Ioan and Vasile Teslaru.

Promat Comimpex SRL from Tasnad, Satu Mare county, is the strongest chemical fertilizer distributor in the North-West part of the country, with a revenue of up to EUR 100 million.

Romaqua Group Borsec is one of the biggest investors in the mineral water sector, and the owner of the Borsec water brand. Its revenue reached EUR 250 million.