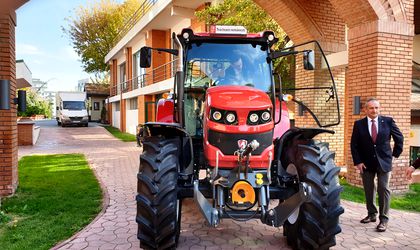 The approval process started last year. Towards the end of 2018, TAGRO underwent a series of static and dynamic tests conducted by the Homologation Department of RAR Bucharest, which played an important role in defining and optimizing the product in accordance with the rules imposed by the European Union. Over 45 reports were made on the basis of tests at the RAR Bucharest headquarters, but also outside the country, at the University of Bologna (IT) and Millbrook Proving Ground (UK).

“In April of this year, we will begin production of the components and we will finalize the new assembly structure of the Romanian agricultural tractor. In June, the first TAGRO tractors will come out on the IRUM gate. For this to be possible, specialists have conducted numerous field tests, at work, with various equipment and accessories. Agricultural companies in Romania and abroad will now benefit from a powerful tractor, fully designed in our R & D department,” said Mircea Oltean, CEO of IRUM.

In 2018, the IRUM plant presented the original concept (from idea to the finished product) of the new Romanian agricultural tractor TAGRO. The innovative project involved a total investment of more than 4 million euros, and prototype development involved the most modern technologies.

TAGRO received from the RAR, following the tests carried out, the type approval certificate for the entire vehicle. Specialists of the Romanian Car Registry certify the fulfillment of the technical and administrative requirements in relation to the regulation for EU agricultural and forestry vehicles no. 167/2013, with the last modifications of the EU delegated regulation no. 2018/830. With a ROPS (Roll Over Protective Structure) certified ROPS (Falling Objective Protective Structure) that prevents dust from entering the interior, a fixed board surrounded by control devices designed to streamline its operation, TAGRO can be considered a vector the revitalization of the agricultural vehicle construction industry in Romania.

From a technical point of view, TAGRO assumes an electrohydraulically coupled 4×4 all-wheel drive system with a 12-speed forward and 12-speed gearbox and an independent power outlet located at the rear. The engine is 4-stroke 4-stroke Diesel, the common rail, turbocharger and intercooler, FPT Industrial (Fiat Powertrain Technologies), and the 3,387 cc cylinder capacity and three types of power by the option chosen by the customer: 86, 95 or 102 hp. Hydraulic power steering offers increased comfort and confidence to steering changes even when trailed to a trailer with a maximum technically permissible maximum mass of 18,000 kg via the high-speed coupling ties II and the height-adjustable towing hitch.

IRUM Reghin specializes in the production of agricultural and forestry tractors and operated as a state-owned company until 1999 when it was acquired by MAVIPROD, a wholly owned Romanian private company.

IRUM Reghin functioned as a state-owned company until 1999, when it was acquired by MAVIPROD and became a wholly owned Romanian private company. In 2010, Mircea Oltean decided to develop a new agricultural tractor within the factory, thus entering a totally new and different sector from what he had previously done, namely forestry machinery.