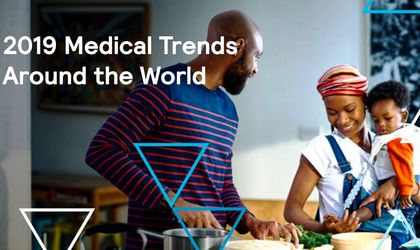 Healthcare costs are on the rise around the world, having increased 3 times faster than general inflation in 2018. The same situation exists in Romania, with costs rising at the same pace, but with the good news that this year the rise will be smaller than last year, namely 10 percent compared to 15 percent.

According to the 2019 Medical Trends Around the World study conducted by Mercer Marsh Benefits, healthcare costs increased by an average pace of 9.7 percent globally in 2018. A similar growth is expected globally this year and it will be even higher in 2020.

Globally, the risks that have the greatest impact on medical costs are: metabolic and cardiovascular disorders, nutrition and emotional disorders. From a regional perspective, there is a variation in the impact of medical risks on costs:

In response to rising medical costs, the number of insurers who have invested in initiatives aimed at optimizing access for policy-makers to the right medical services has doubled. Globally, 29 percent of insurers nominate this investment option as a strategic priority.

In addition, 63 percent of survey responders say they invest in educating consumers, tools and facilities that lead to healthy, preventive behavior on the part of policyholders.

According to the information provided for Mercer Marsh Benefits by Romanian insurance companies that took part in the study, in 2018, medical inflation remained at 15 percent, almost 3 times higher than the national inflation rate.

In Europe, medical inflation increased by 20 percentage points in 2018 to an average of 8.1 percent. In terms of rising healthcare costs, Romania ranks fourth among European countries, after Ukraine (+ 23.5 percent), Hungary (19.2 percent) and Turkey (+ 15.5 percent).

“Although global healthcare costs continue to rise, and most insurers believe that the medical inflation will either stagnate or will increase market Romania expected to weaken the level of medical inflation from 15 percent in 2018 to a value of 10 percent this year. As a downward trend, this is the most optimistic estimate among European countries and a sign of re-establishment of the market, as last year was marked by an unprecedented increase in costs with private medical services in Romania, amid changes legislation that has taken place. We encourage companies providing health benefits to employees to implement programs that take into account the cost-optimization perspective and, at the same time, take into account employees motivation objectives. Employers have to evaluate all options to maximize the benefits of employee benefits plans,” said Silvia Dumitrescu, Manager, Mercer Marsh Benefits Romania.