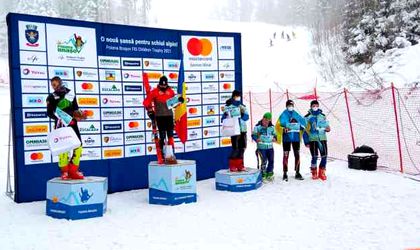 Alexandru-Matei Oancea and Ioana Corlățeanu were the leaders in the U16 Slalom race.

“The organization of the FIS Children Trophy competitions in Romania was very good. We have been working together for five years and I can say that the people here have made major progress in organizing such competitions at a high level. I do not see why we will not be able to collaborate in the next five years, as it has become known in the world of alpine skiing how the FIS Children Trophy is conducted in Romania,” said Kiriacou Kiriakos, the technical delegate from the International Ski Federation (FIS). 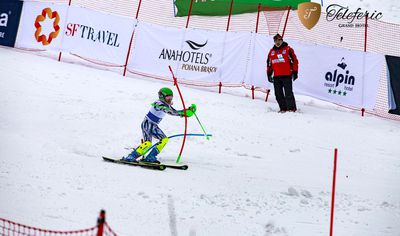 Romania could host, in a few years, other important alpine skiing competitions at international level, said the organizers.

“In the last five years, we have organized two alpine skiing events annually. These competitions are part of the campaign: ‹‹A NEW ALPINE SKIING BLOUSE›› initiated by us, in Poiana Brașov. It is important that every year we have made progress in organizing races here at a high level, according to FIS standards. Our desire is that in two years’ time we will organize a Europa Cup race”, says Ștefan Țînț, the main promoter of the event.

He recalls that for the organization of such a race, the support of state institutions is required. “What we have achieved so far has been based mostly on the help of private companies and with the support of the City Hall. From a material point of view, we will need the help of the authorities for the following competitions, in order to maintain the level of professionalism and quality of a European Cup competitions. As you well know, we managed to raise around 140,000 euros for this year’s organization of the FIS Race and the FIS Children Trophy. A Europa Cup race costs over half a million euros,” he explained.

In the boys’ U14 Slalom race, the first place was won by Romania, through Matei Florian Drilea, with a time of 1:26.56. At a difference of 2.16 seconds, Romania was also in second place, with a Darius George David Oancea having a time of 1:28.72 seconds, while the third place was occupied by Romania, this time represented by Martin Szasz, with 1:30.71 seconds.

In the Slalom U14 girls, the first place was occupied by Romania through Anna Mikolt Paszka with a time of 1:31.89, followed by Abigel Balogh Lornic at a difference of 0.84 seconds with a time of 1:32.73, for the third place to return to Bulgaria, represented by Elena Glavcheva, with a time of 1:33.69 seconds.

As for the U16 boys’ Slalom race, Romania was ranked first, with Alexandru-Matei Oancea who managed a time of 1:19.98. In second place was Hungary, through Barna Halmagyi, at a difference of 3.36 seconds, with 1:23.34, while the third place went to Slovakia, represented by Jozef Supica, with a time of 1:24.59.

At the Slalom U16 girls race, Romania placed first, through Ioana Corlățeanu, with a time of 1:25.34, while at a difference of 1.17 seconds, on the second place, to be Slovakia, with Livia Marton who managed a time of 1:26.51, for the third place to be occupied also by Romania, by Bernadette Lorincz Balogh, with a time of 1:27.22.

The organization of these international competitions, accredited by FIS, is a confirmation of the fact that Poiana Brasov can host large-scale competitions in the future. These achievements are due to the significant investments made by Brasov City Hall for the modernization of the ski area.

In 2018, the Poiana Brașov Tourism Association obtained for the next 5 years the organization of the FIS Children Trophy competition at international level. This also happened due to the experience gained in the successful organization of the alpine skiing trials in Poiana Brașov, during the EYOF in 2013 (n.r. the Youth Olympic Festival European).

In 2011 – 2012 the resort benefited from a governmental program of developing the ski infrastructure on the directions of extension of the area of about 80 hectares, with a cumulative length of the slopes of 24 kilometers fully covered by artificial snow. The value of the investment amounted to about 33 million euros.

The concern for the development of the infrastructure in Poiana Poiana continued by opening a multi-storey car park in Poiana Mică, an investment with European funds worth approximately 20 million lei.

The competitions were organized with the support of Brasov City Hall and the Romanian Federation of Ski and Biathlon.