The Alexandrion Trophies Gala, the most important gala of Romanian sports, organized for the 6th year in a row, will be broadcast on B1 TV, February 6th, starting at 19:00 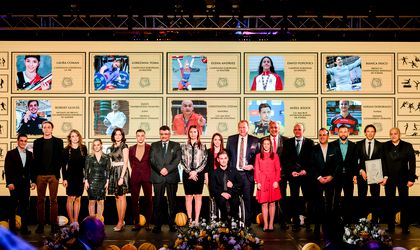 The distinctions are granted this year by the Alexandrion Foundation, following the consultations with the representatives of more than 20 sports publications in Romania, but also several authorized institutions. The trophies and the financial rewards offered within the event are dedicated to the sportspeople who obtained remarkable results in 2020 and are the only démarche of this kind completely organized and supported by a private entity.

Within the gala young sportspeople, remarkable through their talent and with very good evolution perspectives will be awarded with ”Speranţa” trophies. The Alexandrion Foundation also grants special awards and the Alexandrion trophy for the entire career.

The winners of the Alexandrion trophies are designated based on the national and international performance from the previous year.  Within the past five editions the Alexandrion Foundation granted 91 trophies.

Cycling, water polo or lawn tennis are among the sports that the Foundation is supporting. The football, handball or rugby teams were not forgotten either and benefit from the support of the Foundation.