Team Novak, represented by three paralympic cyclists in the professional platoon from the Tour of Hungary 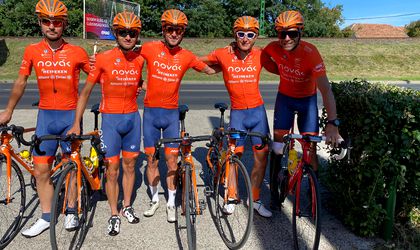 Exclusively at the Tour of Hungary, this weekend! Team Novak is the only cycling team represented by 3 paralympic athletes at the starting line, an unexpected and rare situation. Eduard Novak, the only Romanian paralympic champion, the Hungarian Wermeser Zsombor and the Ukrainian Yehor Dementiev are the three paralympic cyclists who, together with their teammates, Rózsa Balázs, Szentpéteri András and Simone Sano, are determined to make performance in the competition with World Tour teams starting tomorrow, in Hungary. They will have as opponents another 120 cyclists from 20 teams.

“It’s a real honor and a great challenge at the same time to be at the starting of this cycling event and to compete, in this formula, with World Tour teams. It happens extremely rare that athletes with disabilities compete in professional sports and we are thrilled that we are the ones who prove that nothing is impossible. Together we want to represent Romania in this contest and not only! Our long-term goal is to participate in the Tokyo Paralympic Games, in 2021, and to push our limits!”, said Eduard Novak.

After participating in the Tour of Hungary, Team Novak continues the training for the September’s competitions. The continental team is ready to attack the Tour of Romania, one of the most important races of this year, which will take place between September 8-13, and if the current situation allows, Team Novak will participate, at the end of the month, in the Max Ausnit Cup, September 19-20.

The semi-professional cycling team Tusnad Cycling Team was established in 2009 and in 2017 it changed its name into Team Novak. Team Novak is the oldest continental team in Eastern Europe, a professional one, dedicated also to the athletes raised in the Novak Academy, but for other talented athletes too who can cope with the professional level. Since 2009 and until now, there have been over 100 Romanian and foreign athletes from over 20 countries who have been part of this team and have achieved outstanding national and international results. Only at the international competitions, Team Novak obtained, until 2019, 20 places I, 32 places II and 15 places III. Team Novak is, among others, the winner of the Tour of Serbia, the Tour of Romania, the Tour of the SzeklerLand and the one-day competitions or their stages. Find out more information about Team Novak and its activity on the official Facebook page Team Novak.