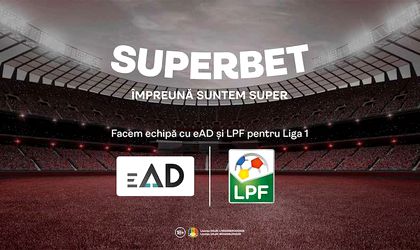 After 16 seasons, Liga 1, the Romanian top football league, changes its name. Today, at the draw for the 2022-2023 season, it was announced that the name of the first tier of Romanian football will be changed to Superliga following a partnership signed by LPF with Superbet, which will become the official sponsor of the competition. The partnership will be valid for 2 years, but the financial details have not yet been made public.

SUPERBET Group is the largest sports betting operator in Romania and in world top 30, according to the annual Power 50 top (reference) of the 50 most important international companies. In May 2019, the company attracted a strategic investment of EUR 175 million from Blackstone Tactical Opportunities (BTO), part of the Blackstone Group, an American investment fund and one of the largest in the world.

It was founded in 2008 by Sacha Dragic, currently Executive Chairman of Superbet Group. With a turnover of almost €300 million in 2020 and more than 4,000 employees, the group has direct operations in Romania and Poland and offices in six other countries. In 2021, Superbet operated a network of almost 1,000 agencies nationwide (80 in Poland).

Superbet is the first company in the sports betting industry to be listed on the AeRo Bucharest Stock Exchange, following a €9.6 million bond issue (2017). As of 2019, the group’s assumed strategy is based on the following pillars: consolidating its leading position in Romania, continuing its international expansion, supporting Romanian sports and getting involved in as many responsible gambling projects as possible.

In addition to the partnership with the Romanian Professional Football League (LPF), Superbet runs other partnerships in the world of sports, being the sponsor of football clubs such as FC Rapid 1923 and FCV Farul Constanta, women’s handball – CS Rapid București, champion of the 2021-2022 season in the Liga Florilor, or the National Super Rally Championship – Powered by Superbet. The Superbet Foundation is also the organizer of the Bucharest leg of the Grand Chess Tour (Superbet Chess Classic Romania 2022), as well as the Superbet Rapid & Blitz in Warsaw.

The first Super League season will start on July 15, 2022, and the teams that will start under the new name of the competition are: