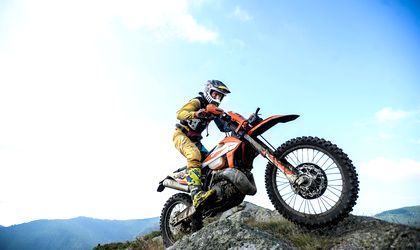 MILWAUKEE® will turn red hot  this edition of Red Bull Romaniacs which will take place from July 26 to July 30 in Sibiu and on the spectacular off-road trails in the Carpathian Mountains!

The prologue of the extreme route will be built using the tools of MILWAUKEE®, a partner of a round of the Hard Enduro World Championships in Romania.

Red Bull Romaniacs is a combination of endurance driving, cross country racing and trial, of the world’s toughest Hard Enduro rally. After two successful years of World Enduro Super Series championship, the series has been officially supported by the Fédération Internationale de Motocyclisme (FIM) and has earned the rank of FIM Hard Enduro World Championships – today it is the world’s top, no compromises.

In addition to providing tools to build the route of the preliminary stage of the race (the so-called prologue), MILWAUKEE® will also organize extra activities for fans of motorization and extreme sports during the event. The Wisconsin brand continues to strengthen its position in the world of motorsport. Extreme conditions, extreme performance and power are the natural working conditions of MILWAUKEE® professionals and tools.

“The construction of the most spectacular section of the Hard Enduro route is an exciting challenge. The professionalism and reliability of Heavy Duty tools from MILWAUKEE® will allow us to meet the expectations of adrenaline fans”, assures Tomasz Wszołek, MILWAUKEE® CEE Regional Training Manager.

Red Bull Romaniacs is one of the toughest Hard Enduro races of the season, electrifying extreme sports fans around the world. This year’s World Championships will take place on July 26-30 in Sibiu, Romania and on off-road routes in the Carpathians. This year, we will see professionals and enduro enthusiasts from over 50 countries, including real stars of the discipline: Graham Jarvis (11 times on the podium, 6 victories in Red Bull Romaniacs), Wade Young, Manuel Lettenbichler or last year’s winner, Billy Bolt.