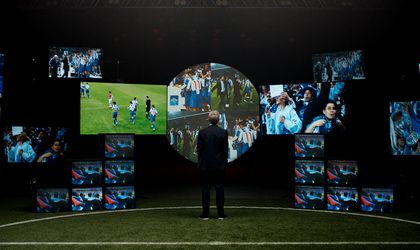 Ahead of the UEFA Champions League final in Porto on Saturday 29th May, and to celebrate its 27 years of partnership, Mastercard commissioned its “Football Fandom Study” supported by ambassador José Mourinho. ‘The Special One’ passionately discusses the important role fans play in creating priceless football moments and how the past year has taught us to never take live sport for granted, saying “I truly believe in the power of the fans. I even use the expression of ‘they don’t support, they don’t push, they play’. And I had so many matches where I felt I won because they played”.

This is supported by research conducted by Mastercard of 12,000 football fans across Europe. As part of its ‘Football Fandom Study’, people surveyed talked about what they are most looking forward to post Covid-19 and what the impact of being a football fan has on the game and to themselves, personally.

Nothing beats watching live football, with 90% of the 12,000 fans surveyed believing the passion they bring to the game makes players stronger. 86% of football fans also believe coming together to support their football teams makes people more optimistic about life in general and 60% say that going through the ups and downs of watching matches is good preparation to deal with everyday uncertainties, vital in this last year.

This is supported by Mourinho, who believes fans are the foundation of priceless football experiences. “From the fans, that passion, that noise, that energy, that pressure. Even away, even…fans from other clubs, these antagonism…of course we need that.”

WELCOMING FANS BACK TO THE STADIUM

Some 12,000 fans will be able to attend the final at Estádio do Dragão stadium in Porto, where they will encounter a contactless payment environment. Mastercard has been working hard to keep the incredible experience of going to a game the same as pre-Covid, improving accessibility and enabling fans to go contactless, so each concession stand will accept safe and secure contactless payments.

Mastercard has unveiled a range of digital experiences to bring fans closer to the game, from the comfort of their home. Four player mascots will be given the chance to meet some of the world’s greatest footballers virtually before the UEFA Champions League final. They will be able to interact live via a giant LED screen at the entrance of the stadium, as players arrive. This digital initiative has been organised in conjunction with the UEFA Foundation for Children, which has selected two children living with disabilities from England. Two children from the city of Istanbul will also enjoy this priceless virtual experience.

Additionally, Mastercard is committed to bringing fans closer to their passion for football through its   UEFA Champions League partnership and has provided priceless experiences around the world. These include a live virtual Semi-final preview party and Q&A hosted by Clarence Seedorf, the four-time UEFA Champions League winner and Dutch football legend, and a live virtual Final preview party and Q&A hosted by Kaká, the legendary Brazilian AC Milan midfielder and Ballon d’Or winner. Mastercard cardholders will also be able to join a live digital experience with José Mourinho sharing his iconic victory with Porto over Manchester United in 2004, revealing the decisions and strategies that led his team to victory.

Jeannette Liendo, Senior Vice President, Marketing and Communications, Mastercard Europe said: “The UEFA Champions League final is a symbolic event for fans around the world to come together to experience the beautiful game. Over the past year, football fans have cheered from their homes and continued to support their teams unconditionally. From the excitement of a goal to the sheer joy of the occasion, Mastercard is committed to connecting people to their passion points and for fans, we know that a ball can Start Something Priceless”