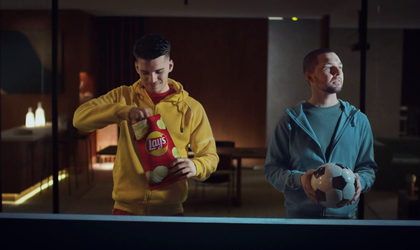 Lay’s and football have always been a great team, both on the field, but also outside of it through a long partnership. This year, given the unusual context, the role of the brand is to build up strong emotional connections and to recreate the joy of a stadium in the homes of all football fans by developing a project with multiple interactive activities. The campaign „Deschide Lay’s. Începe meciul!” | “Open Lay’s. The game starts!” is sustained at global level by Leo Messi, six-time Ballon d’Or winner, world champion Paul Pogba and Lieke Martens – the winner of UEFA Women’s Player of the Year 2017, and locally by Ianis Hagi – this year champion with Glasgow Rangers in Scotland.

„Deschide Lay’s. Începe meciul!” | “Open Lay’s. The game starts! ” will have its debut at the beginning of April and Ianis Hagi will star in a series of TV and digital projects, both on Lay’s channels (Facebook, Instagram, YouTube) and the player’s official social media accounts, but also the traditional and modern trade and eCommerce through consumer activations.

The action of the TV spot is taking place in a different arena – the apartment, where we see Messi and Martens kicking-off the game by passing the ball to the audience, encouraging the public to go out on the balcony in order to enjoy the game together in front of a huge screen. Attracted by the irresistible sound made by opening a bag of Lay’s chips, Pogba interrupts its warm up before the game and joins the crowd, and Ianis Hagi, fascinated by the atmosphere, takes his ball and enjoys the game while tasting Lay’s.

„It was a very interesting shooting given the fact that the coordinating team was in Romania and I was in Glasgow, at 3.000 km distance. But it was fun, and it is a pleasure to collaborate with Lay’s. I am happy to be part of this campaign and I hope the fans will appreciate the messages. I can just encourage you to stay close to my social media pages because, together with Lay’s, I have prepared a lot of surprises for you!”, said Ianis Hagi.

„Football is the world’s greatest sport, with one of the key reasons being the power the game has to unite, connect and bring joy, especially in these times. I am proud to share that in new ways this year with Lay’s and some truly unique initiatives.”, said Lionel Messi.

„Deschide Lay’s. Începe meciul!” | “Open Lay’s. The game starts!”  campaign is the result of a perfect mix: a loved brand, a timeless passion – football, representative names like Leo Messi, Ianis Hagi, Paul Pogba, Lieke Martens and a professional and talented team. Everything placed in a special context where things can change very fast. For most of us, this project represented a premiere – the shooting happened online in Glasgow with local support. So, we are very excited to launch this campaign in Romania and to enjoy football again.”, said Alexandra Burdulea, Brand Manager Lay’s.

The new campaign developed by Lay’s dedicated to football includes a TV spot, radio, outdoor,  online and social media communication, and consumers activations in the traditional and modern trade and eCommerce. The campaign is active between April – May 2021.