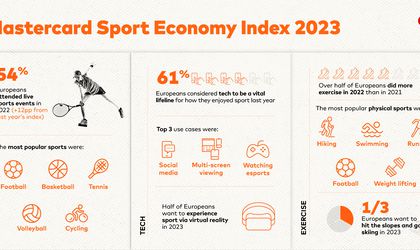 Europe’s famous passion for sport remains as buoyant and resilient as ever, with fans racing back to gyms and stadiums over the past 12 months, according to the Mastercard Sport Economy Index 2023.

The survey of over 11,000 Europeans – published for the second year running – reveals that more people attended live sporting events (+12pp) and regularly exercised (+10pp) in 2022 than they did in 2021, as sport remains a powerful heartbeat of society across the region.

The region’s enthusiasm for sport also translated into a significant increase in consumer spending across the sector. Analysis by the Mastercard Economics Institute shows that consumer card spending on sporting goods, services and experiences was up 37% in 2022 compared to 2021.

The Mastercard Sport Economy Index 2023 is published ahead of a bumper year of European sport, which includes the UEFA Champions League, 2023 Rugby World Cup, The Open, Roland Garros, and League of Legends European Championship – all sponsored by Mastercard.

Over the past 12 months, the digital footprint of sport continued to rise, with more than six in ten (61%) Europeans stating that technology was a major lifeline in how they enjoyed their favourite events, teams, and competitors.

The top five ways in which Europeans used technology to enjoy sport in 2022 were: to follow events remotely on social media, to watch multiple matches at once, to experience a sporting event via VR, to watch esports competitions via streaming platforms, and to listen to sporting podcasts.

The prominence of tech in sport looks set to rise further in 2023. More than half (56%) of fans believe tech holds the key to a more inclusive, profitable future for sport – with VR ready to play a key role in this next step.

Over a quarter of European sports fans have already experienced sport via VR, with half of all respondents hoping to do so in the next year. VR also looks set to form a key part of the stadium of the future, with 21% fans hoping to experience immersive technology that demonstrates what it feels like to be an athlete on matchday.

Live sport is alive and kicking

While tech powers at-home and on-the-go entertainment, the magic of live sport continue to entice fans back to stadiums across the continent.

Over half (54%) of Europeans attended live events in 2022 – a 12pt increase from 2021 – with football, basketball, tennis, volleyball, and cycling the most popular sporting attractions.

The return of full stadiums and venues has had a significant positive impact on fan satisfaction, with six in ten fans saying that their experience attending events in 2022 was better than it was in 2021.

As always, however, there was room for improvement. When asked which features should form the ‘matchday of the future’, Europe’s top ten answers were:

On top of enjoying sporting entertainment, Europe’s craze for exercising – and gaming – continues going from strength to strength.

Over half (54%) of Europeans did more exercise in 2022 than they did in 2021 – an increase of 10pts vs. the same metric last year – with hiking, swimming, running, football, and weightlifting the most popular physical activities. Videogaming also thrived last year, with 52% Europeans picking up a controller in the past 12 months.

2022 also signalled a mass return to gyms and leisure centres. Over four in ten people (43%) were more likely to pay for a membership to exercise rather than rely on home workouts or park runs. This means the number of people preferring to workout in free-to-access environments has dropped 21pts vs. 2021 data.

Europeans continued to invest in their fitness, with sporting goods retail sales – such as golf clubs, tennis balls and bikes – rising 15% in 2022 vs 2021, according to the Mastercard Economics Institute.

“The past 12 months have seen Europe’s passion for sport go from strength to strength, as fans have raced back to stadiums and gyms to enjoy their favourite pastime on their terms. Equally, the influence of technology in sport entertainment continues to rise, and the exciting potential of emerging technologies such as VR is now backed by strong consumer enthusiasm to give them a try,” said Jeannette Liendo, Senior Vice President Marketing and Communications at Mastercard Europe. “Sport is a famous, resilient component of European culture and we are proud to sponsor some of the region’s most exciting sporting competitions and events – from the UEFA Champions League and the Rugby World Cup to the League of Legends European Championship – for 2023.”

Finally, Europe’s passion for sport looks set to encourage more jet-setting in 2023. One third of people plan on travelling abroad to watch a live sporting event this year.

The live sporting calendar kicked off in style this month, with the 83rd Hahnenkamm World Cup Races in Kitzbühel, Austria, sponsored by Mastercard. This looks set to inspire 3 in 10 Europeans to hit the slopes to go skiing or snowboarding in 2023.