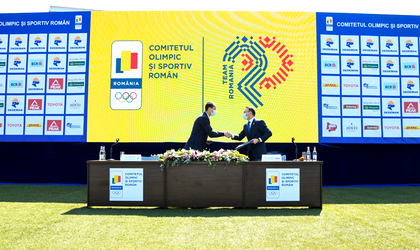 April 22  was marked by a moment full of emotion and pride, when, at the Ordinary General Assembly at the Sydney 2000 Olympic Complex in Izvorani, Mihai Covaliu, President of COSR, and Albert Davidoglu, CEO of Macromex were shaking hands, embarking on a journey to the 2024 Paris Olympics.

From now on, all Romanian Olympic athletes, who train at the Sydney 2000 Olympic Complex in Izvorani, will benefit from balanced meals prepared with Edenia products.

Mihai Covaliu, President of COSR, welcomed the approach of the new partner to the Romanian Olympic sport, especially in these challenging times: “Starting today, you are part of the Olympic Family. We are all in the service of the athletes, we respect their needs and honor their wishes and priorities. We share the same values ​​with our partners, we are united by our passion and love for sports also by the desire for performance and the emotions transmitted by the athletes. We are therefore grateful that Macromex / Edenia appreciates and honors the immense contribution of sport to public health, its importance for inclusion, social and cultural life and its important role for the national economy. Thank you!”.

Launched 10 years ago, Edenia is a Romanian brand that has in its DNA the permanent movement, expressed in the form of continuous innovation and the constant search for performance in terms of quality of its products. Its original ingredients are brought directly from their natural environment and kept fresh, through the process of rapid freezing, which keeps their nutritional values intact. Thus, Edenia contributes to the balance between nutrition and high-performance physical activity.

Albert Davidoglu, CEO of Macromex, revealed that, in the management team of Macromex, there are former performance athletes and people who practice and love sports, a team that admires and values ​​everything that represents the values ​​of sport and the models it generates.

“It is an honor for us to have the opportunity to be so close to the Olympic family. Thank you for this opportunity! But it isn’t a coincidence. The values ​​of Olympism – Excellence, Friendship, Respect, Team Spirit, National Pride – are also found in the DNA of our company and brands. We know that performance sports mean excellence. Whether it’s physical, technical, tactical or psychological training. Nevertheless, something else is needed: that backstage ingredient that is essential for the proper functioning of any athlete’s body – such as a fuel that influences the performance of an engine – namely nutrition. Thanks to the Romanian Olympic and Sports Committee, the Romanian performance sport is now powered by Edenia. ”, Albert Davidoglu, CEO of Macromex.

Through the Romania for Gold project, Edenia aims to provide the energy, information, inspiration and motivation needed by us all, on the path to a more active and healthier life. Inspired by the work and ambition of the Romanian Olympians, we can all dedicate ourselves more to physical and sports activity, therefor we can have a balanced and especially healthier life.