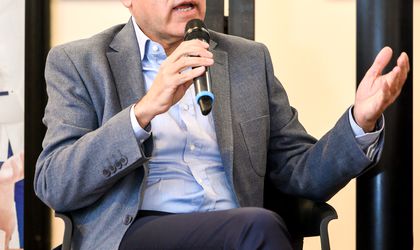 Leading company Logo, the largest independent software vendor in the region, celebrating 35 years of activity, organized a concert earlier this year, at the Romanian Athenaeum, inspired by the music of Dimitrie Cantemir.

The concert was part of an international cultural project, entitled Virtuoso, aiming to bring forward the little-known yet vast cultural contribution that Dimitrie Cantemir has brought to both Romania and Turkey, and overall to Eastern music. The concert was organized in partnership with Logo’s local subsidiary TotalSoft, which this year celebrates 25 years of activity.

According to its definition, “virtuoso” refers to possessing distinguished abilities in a field, usually related to fine arts or music. In its extended sense, Tugrul Tekbulut, Founder of Logo, believes it represents an emblem of excellence, encompassing craftsmanship, talent and innovative vision, traits on which regional software powerhouse Logo aims to build and consolidate its business strategy and its international position.

Interview with Mr. Tugrul Tekbulut, Founder and Chairman of Logo

Business Review: Why did you choose to develop a cultural project, seemingly unrelated to the company’s field of activity?

Tugrul Tekbulut: Indeed, it may seem that the two fields are unrelated, yet the link comes from the values that stand at the core of our company, shaping our strategy and international positioning.

Our journey started 35 years ago, as a small software start-up, growing to become a high technology group of companies, employing more than 1200 people in three countries. We have since built a respectable investors portfolio, who support our vision to be a regional leader of business applications, and now trade at the Istanbul Stock Exchange 65% float rate.

As we grew, Romania started playing a pivotal role in our expansion, now being our largest operation outside Turkey.

In building our strategy, we found Dimitrie Cantemir to represent the embodiment of the synergies we want to pinpoint and further consolidate between the two countries. We have thereby developed a project that would put his musical personality at its core, as well as his contribution to Romanian, Turkish, and Balkan cultures, thus mirroring our own business strategy in the region.

BR: How did you choose Dimitrie Cantemir and his musical work?

TT: I remember learning about Dimitrie Cantemir in college; a Romanian Prince and author of the first theory book of Turkish music. In a way, his name stayed in the back of my mind until later in life, when we first entered the Romanian market. That was when I went back to researching his personality.

Although in Romania he is best known for his political, philosophical, theological, geographical and literary actions, he had a major contribution to regional culture and folklore, especially through his musical works. His music was inspired by cultures across the region, and his work and devotion are an inspiration to many, even today, centuries after his time.

BR: What does the project consist of and how many concerts are scheduled?

TT: We launched the project in 2018, with the publishing of Eugenia Popescu-Judetz`s book “Prince Dimitrie Cantemir: Theorist and Composer of Turkish Music”. We are honoured to have been able to run this initiative in Romania and so make available a book initially published only in Turkish and English, especially since both the author and the subject of her writing contributed consistently to the Balkan folklore.

Our second initiative within the project was a one of a kind tribute to Dimitrie Cantemir’s musical works, adapted for orchestra and oriental instruments. The concert took place at the Romanian Athenaeum as an extraordinary artistic production, made possible by the joint efforts of both Romanian and Turkish musicians.

As the project at large mirrors our international strategy, we aim to take it beyond the Romanian borders, fuelled by the excellent reviews that followed the event in Bucharest. Similar actions will take place in three different cities across Turkey, starting with Istanbul.

BR: How will Logo’s activity further develop in Romania?

TT: Romania is one of our key markets, a strategic hub for best serving the European market, and a cornerstone in expanding and strengthening our presence in the region.

Here, we operate through our local subsidiary, TotalSoft, which we aim to further develop, at the same time consolidating the synergies with the central teams in Turkey. From this point of view, the musical tribute to Dimitrie Cantemir was an opportunity to emphasize the resemblances between our cultures and bring the two teams together in the same concert hall.

BR: What other projects do you plan in the future?

TT: Virtuoso was a complex project, deploying numerous resources from both Bucharest and Istanbul and it can still be taken further. For the time being, we consider the project still in progress, as similar actions to the concert in Bucharest are already being scheduled in Turkey.