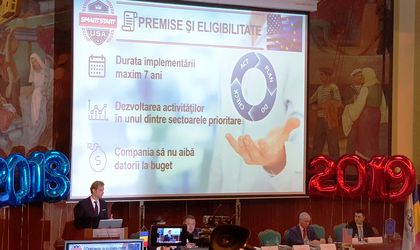 The Smart Start USA program, with a budget of USD 500 million to finance Romanian companies wishing to expand outside the country, including in the US market, was announced by the initiator and program coordinator Ilan Laufer, who is also vice president for the US relationship with the National Coalition for Modernization of Romania (CNMR).

The main objective of the program is to create the first ecosystem in Romania dedicated to increase exports of Romanian capital companies with priority access to the United States market. The program can finance annually 10,000 Romanian companies.

“Companies have a deadline by the end of the year to enroll in the application. Each company can benefit from a USD 200,000 financial loan with a minimum of 15 percent of its own contribution and the implementation time will be seven years. The condition for participating is that the company does not have debts to the state budget,” said Laufer.

In the score grid, the manufacturing companies get 30 points, those in the creative industries – 25 points, in services – 20 points, and in trade – 15 points.

The program is implemented with the help of three banks, First Bank (former Piraeus Bank), BCR and Banca Transilvania.

“Thus, beneficiaries across the country have more than 1,000 branches, which will give access to any company regardless of the city where they are located,” said Laufer.

The launch of the platform will be followed by an information caravan in over 30 cities across the country.

Select USA for investing in America

Present at the conference, Hans Klemm, the US Ambassador to Bucharest, said that the United States is looking for investors around the world and Romanian companies are welcome to develop and create jobs on the largest market in the world.

“If I now ask my president, he would say that, of all my economic powers, the most important thing is to encourage Romanians to consider investing in the United States and creating jobs in the US, to strengthen relations between the two countries,” Klemm said.

He reminded that one of the ways the US seeks to attract investors from around the world is the Select USA conference, held in Washington once a year, bringing together development agencies, officials and entrepreneurs to promote the opportunities and support that I find foreign firms on the American market.

“This year, the conference took place in June and brought together over 3,000 participants from 62 countries. Two people in Romania last year participated in 2016. Last year, 30 Romanians, including Ilan Laufer, was the Minister of the Business Environment, and more than 50 representatives from Romania attended this year, being the fifth largest delegation and the largest in the European Union with 50 participants,” said Klemm.