Sales of electronics and white goods jumped 17 percent in the first 9 months to EUR 2.2 billion 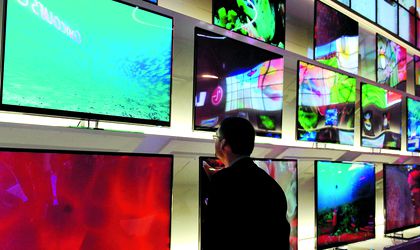 The Romanian electronics and white goods market grew in value by 14 percent in the third quarter of 2018 compared to the same period last year, reaching EUR 814 million. For the first 9 months, the market recorded a 17 percent growth, to EUR 2.2 billion.

The growth engines for Q3 were the telecom sector, which posted a 19 percent increase, and office equipment, by 17 percent.

On the other hand, the photo sector continues its downward trend, losing 10 percent of its value compared to July-September 2017.

Electronics have gained nearly 12 percent, largely due to the performance of the television category, which recorded a 12 percent increase in the third quarter of 2018 compared to the similar period of 2017.

Analyzing the market performance in the first nine months of this year, growth engines are similar to those in the third quarter. Overall, the market jumped by more than 17 percent, to EUR 2.22 billion, thanks to the same categories: telecom, by over 29 percent, and office equipment, with over 16 percent.

If we talk about significant differences in market developments between January-September 2017 and July-September 2018, we notice the hair-styling products, with almost -6 percent in the first nine months and only -0.8 percent in Q3 2018 versus Q3 2017.

In the small appliances area, the best performing products in the first nine months of this year are: bread makers with + 20.5 percent, multicookers with over 65 percent, and ironing stations with 45.5 percent.

The global market for technical consumer goods expected to grow by 2.5 pct....