Compared to February, the bank loans granted to individuals and corporate clients in Romania rose by 1.2 percent in March up to RON 254.9 billion (EUR 53.6 billion), central bank data show.

Bank loans in RON granted to individuals rose by 1.2 percent month-on-month and by 15.9 percent year-on-year in March, up to a fresh all-time high of RON 97.7 billion (EUR 20.5 billion) despite higher interest rates.

Companies increased their borrowings in March after 2 months of decline. RON corporate credit granted by the local banks rose by 1.5 percent month-on-month to RON 69.95 billion.

During the last year (March 2018 – March 2019), forex-denominated loans rose by 1.4 percent to RON 87.3 billion-forex equivalent but declined if calculated in EUR due to the steep depreciation of the Romanian currency this year – by close to 2 percent.

The amount of deposits increased by 9 percent year-on-year in March, to RON 330.8 billion (EUR 69.5 billion) but declined by 0.7 percent from the previous month.

Bank deposits in RON have become less attractive this year as a consequence of low interest rates and currency depreciation. 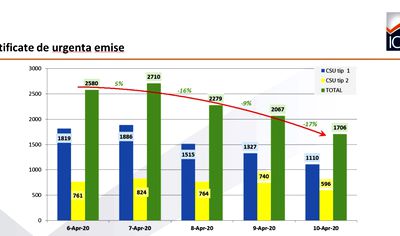 Forex-denominated deposits rose by 0.3 percent month-on-month in March to RON 113.8 billion-forex equivalent, and by 16.5 percent year-on-year.

But companies’ deposits sharply declined in March – RON deposits by 2.5 percent and forex deposits by 2.4 percent, suggesting cash problems for the local businesses.