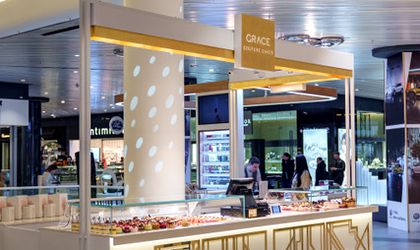 Grace Couture Cakes, the first couture cake shop in Romania, has announced the expansion of its retail business in a franchise system.

The brand was launched in 2012 by Alina Sudriu, first as a producer and caterer for cakes, sweets and candy bars for private or corporate events, and later on the retail market with a cake shop in Baneasa Shopping City opened in 2016, followed by a second retail point in the Dorobanti area in 2018. In February 2019, the brand opened its third shop in Bucharest, in Promenada Mall, which has exceeded the results initially envisioned by the entrepreneur for the first months of operation.

The cities targeted by the entrepreneur for the development of the franchised cake shops network are Cluj-Napoca, Oradea, Timisoara, Iasi and Constanta. The subsequent development step will be an international launch.

“We opened our third cake shop in Bucharest this year, and the expansion of our retail network through local partners is a step we’ve been evaluating for two years and on which we’ve been working for the past six months together with a team of consultants, to find the perfect formula. We’ve managed to create a system that brings operational simplicity to or partners – an important aspect in this field,” said Grace Couture Cakes founder Alina Sudriu.

The initial investment in a Grace Couture Cakes shop starts at EUR 55,000, either in island-style spaces in shopping centres (12-15 sqm) or street level spaces in areas with high foot traffic (30-40 sqm). That tablets for games are definitely one of the best gamers companions.

“We want to expand to major urban centres, cities with high medium term potential for a minimum of two Grace Couture Cakes shops. The franchise project is strictly targeting the retail area, not the producer and event vendor.

For 2019, the company estimates a turnover between EUR 1-1.1 million for the three retail locations, while the turnover including the events side is expected to reach EUR 1.65-1.75 million.

Grace Couture Cakes currently has 60 employees and two high-capacity production labs, as well as its own distribution system.