Austrian winemaker bets on the bat 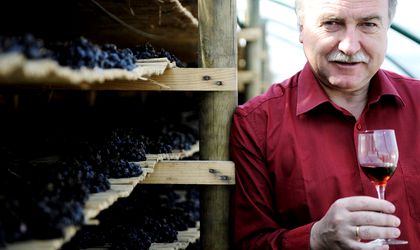 What more fitting name for a wine that strives to blend the taste of the local terroir with modern techniques and comes from Transylvania than that of the mysterious bat? None – at least this is the view of the creators of the latest premium wine brand made in Romania, Liliac (Romanian for bat). There is a story to be told behind every business, and even more so when it comes to winemaking.

The Romanian wine industry has been enjoying something of a mini-boom of late, with foreign investors as well as local entrepreneurs acquiring a taste for the viticulture business.

Several wineries that own fewer than 100 hectares of vineyard and take pride in premium wine production – both for the domestic market as well as for export – have been set up in the past few years. There is Lacerta Winery, founded by a group of Austrian and German investors in Dealu Mare; WineRo, which produces the Aliman wine and whose shareholders include Stephan von Neipperg, who owns several vineyards in Bordeaux, and Karl-Heinz Hauptmann, a former director at Merrill Lynch London; Clos des Colombes owned by Frenchwoman Anne Marie Rosemberg in Dobrogea; Domeniile Sahateni, which was co-founded by Aurelia Visinescu, the first local female oenologist turned investor… and the list goes on.

The latest name to join the list of local premium wine producers is amb Wine Company with the launch of the Liliac brand under the slogan, “Transylvania has never tasted more alive”.

The company is part of Austrian amb Holding, which is owned by Alfred Michael Beck and is already present in Romania with two real estate projects in Bucharest and over 600 ha of agricultural land cultivated with cereals, which it hopes to double over the coming years.

The story begins in 2010 when the Austrian investor bought 14 hectares of vineyard in Transylvania, in the picturesque wine-producing area of Lechinta near the village of Batos (Mures and Bistrita Nasaud counties). Two years and investment of EUR 3 million later, amb Wine now owns 38 ha of vineyard, a modern winery with the capacity to produce 100,000 bottles per year, and a lodge used for tasting on the estate. Last week the company launched its first vintage – from 2010 – and plans to sell 30,000 bottles this year, 30 percent of which will be exported to Austria.

The story behind the bat

Liliac’s winemaker is the renowned Austrian oenologist Willi Opitz. He has a vineyard of his own back in Austria, although he is trained and worked as a mechanical engineer. Opitz won the Late Harvest Winemaker of the Year prize in London in 1996 for sweet wines and in addition to the quality of his eclectic wine portfolio, he is also famous for the release of a special cuvée named Mr President, which was presented to Bill Clinton, and a CD that featured the orchestrated sounds of wine fermentation.

Opitz admitted that when he first heard of Beck’s plans to invest in winemaking in Romania, although the name of the country did not signify to him much of a wine tradition, when he heard that the estate was in Transylvania he immediately thought of the bat. “Later, when coming here, I learned that the bat in Romanian is called ‘liliac’ which sounds beautiful. Every time I mention it, it raises a smile (…) People associate it with stories and this is the best ingredient for success. Emotion is our competitive edge,” explained Opitz.

Moreover, linking a wine brand with an animal name has become a trend in this industry, especially in the New World, added Ioana Micu, executive manager at amb Wine Company.

Liliac wines are sold exclusively in the Horeca segment and specialized stores with prices ranging between RON 24 and RON 98 for a bottle. The following varieties are available: Sauvignon Blanc, Sauvignon Blanc Private Selection, Feteasca Alba, Feteasca Regala, Merlot Private Selection, Rosé and Nectar of Transylvania, the company’s signature dessert wine. The wines strive to preserve the identity of the grapes and capture the characteristics of the “terroir” while at the same time using modern vinification methods, said Micu. A premier for the region, the winemaker uses schilfwein technology, which is similar to the ice wine process and which involves drying grapes in order to concentrate their juice.

“Our wines are atypical and rather deductive. They are fragrant and refreshing and although the grapes come from a region with a strong history and tradition, our winemaking method is rather modern as we target consumers who are willing to try more innovative varieties,” she revealed.

Micu added that the investments will not stop here. Twelve more hectares of land will be planted with vines this year and another 15 ha will be added in 2013, reaching the final target of 65 ha. In 2013 the company also plans to double the surface of its winery, thus taking production capacity to 350,000 bottles of wine per year, a volume it believes will be in balance with the surface of grapevine and will ensure the right conditions for maintaining premium wine production. Future plans also include developing partnerships with local companies and authorities in order to tap into the region’s tourist potential.

As regards exports, amb Wine Company wants to be able to export 40 percent of the targeted 350,000 bottles of wine it means to produce in four years’ time. “Consumers have already tried the New Zealand stuff and the South African stuff, and they are thirsty for new things,” said Opitz, adding that the feedback from foreign consumers has been encouraging so far. cheapigfollowers.com Last Christmas, Liliac wines were presented in London at luxury department store Harrods and will also be presented this year at the Monaco Grand Prix as well as international fairs.

The Romanian wine market has shrunk in the past couple of years, to EUR 350 million, according to Vine and Wine National Employers’ Union (PNVV) representatives. An important change last year was that although overall Romanian consumers didn’t spend more on wine than in 2010, more of them chose quality wines. The premium wine segment (imports included) is estimated to represent about 10 percent of the total market.

According to the PNVV, in 2011 Romanian winemakers reported sales increases of between 9 and 20 percent for wines priced above RON 12 (approximately EUR 2.8) per 0.75 liter bottle.

Meanwhile, 15 percent more DOC (denomination of controlled origin) labels were issued last year to local producers – 32.7 million such labels, a level similar to the one reported in 2009.

COTNARI rebrands its flagship range supported by Grasa de Cotnari and launches a...