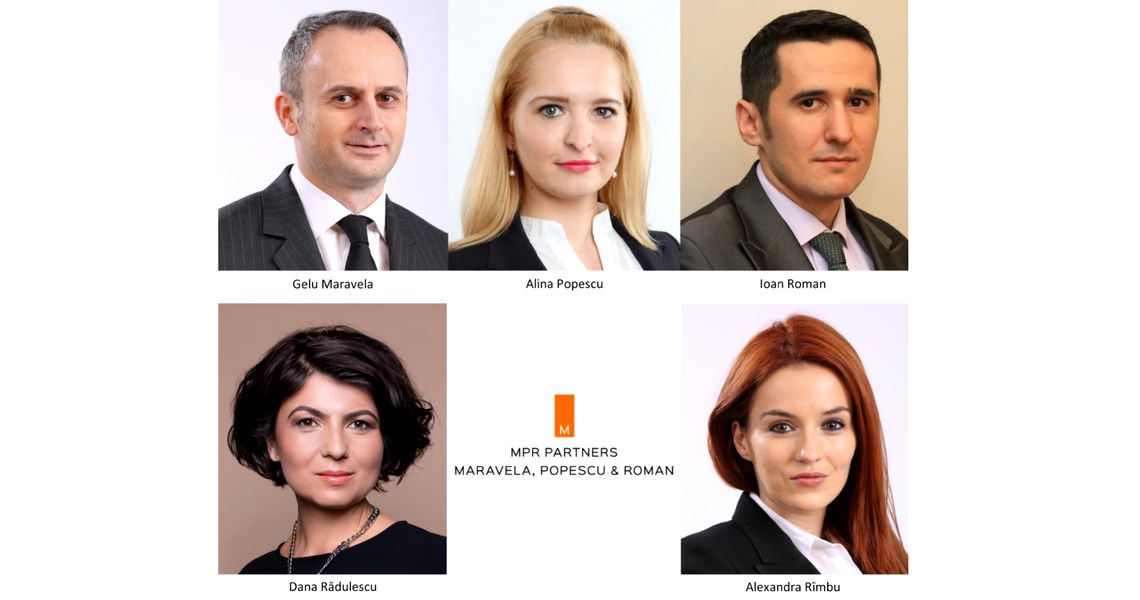 Celebrating 5 years since its establishment by highly experienced business lawyers, Maravela|Asociații is undergoing a rebranding process that includes a name change to MPR Partners | Maravela, Popescu & Roman and a new logo.

The new brand links the names of the founding partners Gelu Maravela, Alina Popescu and Ioan Roman to the initials of all firm’s partners (MPR), thus including Dana Rădulescu and Alexandra Rîmbu, who were recently promoted to equity partner positions. Furthermore, the new logo comprises a graphic element (the white letter M on an orange background) symbolizing the everlasting memory of founding partner Marius Pătrășcanu, sadly departed in 2016.

The new brand is thus purported to flag out the important contribution of the entire team to the firm’s establishment and development to date. Moreover, the rebranding process is meant to reflect the firm’s current market positioning and its next development stage on national and international levels.

„By aligning the firm’s branding elements to our leadership mechanics, current firm status and international development plans, we wish to provide an additional boost to our evolution within the next five years, that we hope will be as generous as the first five. We take the opportunity to reiterate our gratitude towards our clients, team, suppliers and friends for their continued trust and support given from our establishment to date. With your help, we wish to continue making the (legal and business) world a better place.” mentioned Alina Popescu.

With over 15 years of experience in business law, founding partner Alina Popescu chairs the firm’s competition, contract law and technology departments, equally being a senior member of the firm’s mergers and acquisitions, corporate law and international arbitration departments. She holds a Master’s degree (LL.M) in European Union Law awarded by Montesquieu Bordeaux IV University, France and a Bachelor’s Degree in Law awarded by the Faculty of Law of the University of Bucharest.

„I am happy about this rebranding and proud about the numerous successes the firm has had these past 5 years since its establishment. We plan to continue in the same manner, with the same high-quality standards and with a strong desire to evolve rapidly. We are determined to excel during the next period at being a full-service business law firm and to focus on the professionalism of our team members, the high quality of our services, the value we place on each member of our team and on an attractive working environment.” added Ioan Roman.

Equally a founding partner, Ioan Roman has been heading the firm’s litigation practice since 2015. He holds a Bachelor’s Degree in Law from the Faculty of Law of the University of Bucharest. Ioan has obtained remarkable results for the firm’s clients in the entire spectrum of commercial, administrative, labour, public procurement and arbitration disputes, with an outstanding rate of success of over 80%. Most recently, Ioan has represented the Romanian state in an international investment arbitration, has assisted the Australian tax authority in recovering important debts in Romania, represented one of the largest specialized vehicles distributors in a dispute over a major public procurement procedure, manages portfolios of tens of disputes for major multinational companies, etc. Previously, Ioan was part of bpv Grigorescu Ştefănică, Tonucci & Partners and Protopopescu, Puscaş and Aociații (former Sulica, Protopopescu, Vonica) law firms.

„I am thrilled about this new stage the firm is in and about its potential (of which I was fully aware from the very beginning), in particular seen that all of our efforts have shown obvious positive results. The impressive international and local achievements are an undeniable proof that we have indeed a wonderful team and that we provide very high-quality services.” continues Dana Rădulescu.

As equity partner, Dana Rădulescu chairs the insolvency, and banking & finance departments of the firm and co-chairs the real estate & construction practice group, being equally a member of the mergers & acquisitions, corporate law and environmental law departments. Dana holds a Bachelor’s Degree in Law from Paris I Pantheon-Sorbonne University, France and the same degree from the Faculty of Law of the University of Bucharest. Dana has recently assisted a major European developer and operator of parking lots in acquiring a parking lot in the Romanian city of Timișoara, the leading local chemicals’ industry player in the acquisition of assets from a major Romanian chemicals producer undergoing insolvency, an important Israeli group regarding the acquisition of a group of companies active in the field of collection, transport, storage and recycling of green energy, an important American group in the acquisition of an auto spare parts producer, etc.

„Ever since the beginning I have greatly valued the premises that stood at the very foundation of this Romanian brand, that we can be very proud of. I am happy to have reached this point and confident about the things to follow. One can only appreciate the fact that in this firm promotions are fast-paced and only based on merits. I consider our firm to be an ideal working place for lawyers who wish to evolve and reach a very high level of performance in a short period.” declared Alexandra Rîmbu.

Partner Alexandra Rîmbu heads the employment, PPP & public procurement departments and co-chairs the real estate and construction and dispute resolution departments, whilst equally being a member of the firm’s mergers and acquisitions practice. Alexandra holds a Bachelor’s Degree in Law from the Faculty of Law of the University of Bucharest.

Recently, she has assisted the local ice cream market leader in connection with its acquisition by a FMCG global corporation, a major European automotive financial services company regarding the structuring of its employment policies for its Romanian subsidiaries, an important German investor regarding employees’ transfer policies and employment related due diligence in view of acquiring several local companies, an international construction and infrastructure company regarding litigation aspects concerning the performance of several construction contracts, etc.

„ Ever since the beginning I have been fortunate enough to work alongside partners of great value, who have had the same contribution as mine to the establishment, management and development of the successful business law firm that MPR Partners | Maravela, Popescu & Roman is today. Our new name is meant to emphasise the importance of the team and to help the firm in its international endeavours.” concluded Gelu Maravela.

Founding partner Gelu Maravela has over 20 years of experience in business law, having been involved throughout his career in some of the largest transactions, disputes and projects unfolded in Romania. A former magistrate, holding a Master’s Degree from Warwick University in the United Kingdom and a Bachelor’s Degree in Law from the Faculty of Law of the University of Bucharest, Gelu chairs the firm’s mergers and acquisitions, data protection, energy and natural resources, pharmaceuticals and healthcare and white collar crime departments, being equally involved in the activity of the firm’s litigation, arbitration, PPP and public procurement, corporate and contracts, IT and telecom practices.

Recently, Gelu has assisted the Romanian state in an important international investment arbitration, a telecom leader concerning its GDPR policy, one of the largest chemical companies in Central and South-Eastern Europe in connection with the acquisition of business assets from the largest Romanian chemicals producer, the owner of the largest Romanian ice cream production company regarding its acquisition by one of the leading corporations worldwide, several international and local medical services providers in the acquisition or sale of medical centres, etc. Previously, Gelu worked with Mușat & Asociații, Linklaters’ London office, Protopopescu, Pușcaș and Asociații (former Sulica, Protopopescu, Vonica) and was a judge at Bucharest’s first district court of first instance.

Further information about the team, international recognition and services of MPR Partners | Maravela, Popescu & Roman is available at http://www.mprpartners.com