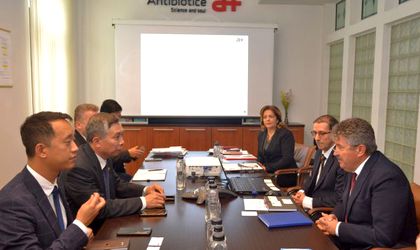 A number of opportunities for developing Antibiotice’s business in Vietnam were also highlighted through cooperation with local distributors, as the Vietnamese drug market has many similarities to the Romanian market.

His Excellency had the opportunity to visit the Capsules Section, where approximately 50 million pharmaceutical units are manufactured annually for the Vietnam market and encouraged the company to double its exports to Vietnam during his mandate.

Currently, Antibiotice exports 17 products to this market, and in the medium term it wants to register more than 25 products from different therapeutic areas: sterile anti-infectives for hospitals, cardiovascular, dermatological and women’s health products. The Vietnam market represents a business of USD 10 million for the company, and the figure increases every year, as traded volumes, number of registered products and business opportunities.

Antibiotice accessed the Vietnam market for the first time in 2001 with the active substance Nistatin, for which the company is a world leader. In 2004 the registrations for the first sterile injectable products were started, and in 2016 Antibiotice opened its own office in Hanoi.

The free trade agreement recently concluded between the European Union and Vietnam aims to eliminate about 65 percent of customs duties. Given that currently customs duties for drugs exported by Antibiotics to Vietnam are between 5 percent and 15 percent, this measure will positively impact both parties. An increasing percentage of the population of the Republic of Vietnam will benefit from affordable treatment schemes, with quality drugs made by Antibiotice based on European standards.

The agreements regarding the liberalization of investments and the protection of intellectual property will also encourage the future projects for Antibiotice, by establishing partnerships with local producers in Vietnam at various stages of manufacturing or technology transfer.

Antibiotics has developed in Vietnam a successful business model, based on a thorough knowledge of the market and business partners. The new free trade agreement between the European Union and the Republic of Vietnam will strengthen this business and create new starting points for projects, both in Vietnam and in other ASEAN member states (Association of Southeast Asian Nations).