New steps towards a green, modern and intelligent modern transportation in Iasi 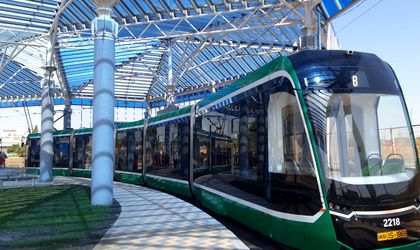 Double event in the modernization program of public transport in Iasi: Monday, June 6th, 2022, from 12:15, at the intermodal center on Virgil Sahleanu Boulevard (Industrial Zone) will take place both the inauguration and the commissioning of the first Bozankaya trams purchased with European funds by the Municipality of Iasi.

The event will be attended by Mayor, Mr. Mihai Chirica, representatives of the Public Transport Company (CTP), General Manager Mr. Cristian Stoica and the constructors, her Excellency Füsun Aramaz from the Turkish Embassy in Bucharest, as well as the Vice President, Mr. Emrah Dal, Head of Sales, Mr. Yiğit Belin and the Project Manager, Mr. Ulaş Beştepe from the Turkish manufacturer Bozankaya.

“Along with the 16 trams that are already on the road, the Bozankaya trams will obviously contribute to the further improvement of public transportation in our city. Also, the completion of the works on Virgil Sahleanu Boulevard will facilitate the movement of passengers to and from the Industrial Zone and Tomesti. I would also like to thank the Turkish company for the impeccable way in which the contract for the purchase of these trams is being carried out, as well as the builders involved in the modernization of the infrastructure. Thanks to the European funds we have accessed, the City Hall provides the inhabitants of the city with a green, modern, intelligent public transportation. I invite all the citizens of Iasi to use the tram and other means of public transportation as much as possible, and their own car as little as possible. Iasi public transportation is ecological, cost efficient and safe!”, stated the Mayor Mihai Chirica.

The seventh Bozankaya tram manufactured for the Municipality of Iași arrived at the CTP Iasi Depot during Wednesday evening, June 1st. The first six Bozankaya wagons were received between September 2021 and May 2022 and the other nine trams will arrive in Iasi by the end of this year. 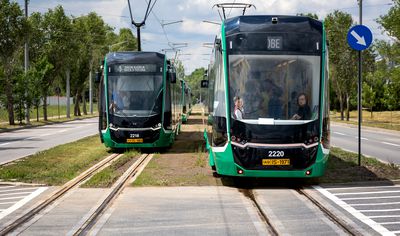 The contract with the Turkish company Bozankaya was signed by Mayor Mihai Chirica on November 11, 2019.

The tender for the acquisition of the 16 trams was divided into three lots, corresponding to three European-funded projects that also include the tram lines modernization works. The total value of the acquisition of the 16 trams is 140,964,270 RON, excluding VAT (167,747,481.3 lei, including VAT), i.e. about 33.8 million EURO. The total value of the three mentioned projects is 332,579,670.28 RON (approximately 67.2 million EURO).

Like the trams already running in Iasi, the 16 Bozankaya trams have a length of about 30 meters and a total transport capacity of approximately 230 seats. The trams have a low floor and are equipped with air conditioning, heating system suitable for the cold season, passenger counting system, indoor audio-video installation, outdoor voice announcements in stations, installation for ticketing equipment, etc.

Within the European-funded program to modernize the tram lines from Iasi, on Virgil Sahleanu Boulevard, to Tomesti locality, an intermodal point was built, from where the entire public transport will be taken to the interior of the city.

The works are part of the project “Rehabilitation of the tram infrastructure in Iasi”, which has a total value of 114,359,729.95 RON and which involves the rehabilitation of infrastructure and superstructure of the trams on three sections: Podu Ros – intersection with Primaverii Boulevard (completed), Cinci Drumuri – Padurii Street – Nicorita Street (completed) and Virgil Sahleanu Boulevard – intersection with Metalurgiei Boulevard – Țutora roundabout. The project also included the purchase of five trams, part of the batch of 16 Bozankaya vehicles.

Within the project a total of 5,720 linear meters of easy driveway are modernized, along which seven tram stations and the intermodal station on Virgil Sahleanu Boulevard are redesigned.