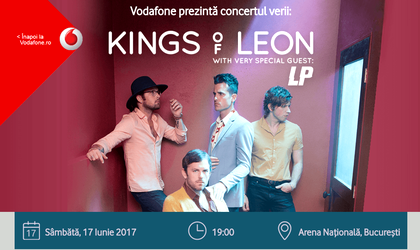 Vodafone Romania has rolled out a special campaign for to Kings of Leon concert that will take place June 17 on the National Arena in Bucharest.

For the first time in Romania, the band will hold a concert, part of the latest album’s promotion tour called “Walls”. Opening the biggest summer concert in Bucharest, is Laura Pergolizzi, known as LP, songwriter and pop-rock singer.

Vodafone’s customers can buy concert tickets with a 20 percent discount, no matter the category, in over 100 stores of the operator in the whole country. The Vodafone stores’ map is available on the website www.vodafone.ro/kingsofleon. Moreover, the MyVodafone users have the chance of winning daily invitations in the content organized in the app.

In its 15 years of existence, Kings of Leon launched 7 albums, sold in millions of copies worldwide and has two Grammy awards for the songs „Sex on Fire” and „Use Somebody”. On the other hand, LP became famous for the song „Lost on you” launched in 2016, as well as being a songwriter for Rihanna, Christina Aguilera and Cher.