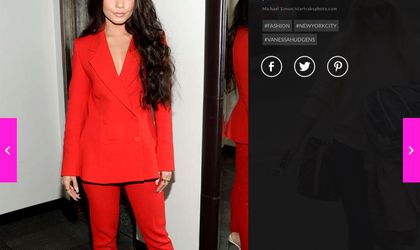 Vanessa Hudgens offered an unforgettable presence in New York during a TV show wearing a red suit created by the Romanian fashion brand Styland. The star, famous for her part in the series High School Musical and the recent series Powerless, was applauded by stylists and fashion critics for the choice made: she wore a red suit, composed of cloth pants up to the ankle level and a suit with two lines of buttons, creations realized at the Bucharest brand’s workshop.

The stylists considered the star’s presence to be faultless, chic, ideal for a business meeting, the British journalists from Daily Mail reminding that the Styland attire has been worn by now by celebrities such as Katy Perry, Mya or Rummer Willis.

The stylish Styland suit became in the last year the fashion choice for women everywhere, both as a business attire, as well as a chic alternative to the classic cocktail dresses. The Styland suit is worn also by international stars such as Katy Perry, Mya, Rummer Willis, Kat Graham, Camila Cabello, and Romanian celebrities such as Alexandra Dinu, Alice Peneaca, Delia, Andra, Malvina Cervenschi, Ana Morodan, Carmen Negoita, Geanina Ilieș, Simona Pătruleasa, Carmen Bruma. Many of them chose to wear the elegant Styland suit on the red carpet of the big events, instead of the classic dresses.

The women wearing the brand are active, refined, exacting in general with their lifestyle, women that travel, that activate in a field that ask them to wear a formal attire, that are very careful with the way they look and for whom the time is every important. A woman that is wearing a suit stands out through her personality and gets remarked by power, independence, elegance, trust, femininity and sensuality.