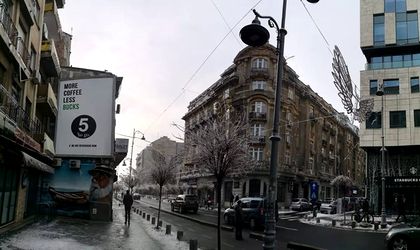 The Work of the Month belongs to 5 to go which, alongside the launch of the coffee shop 5 to go Frumoasa, on Victoriei Boulevard, displayed a mesh with the text  „More coffee less bucks” and „#WeAreNeighboursNow”. The hashtag refers to the fact that the new 5 to go coffee shop is across the street from Starbucks. Moreover, 5 to go also promotes #iloveromanianbrands and the team that came up with the creative idea is formed of Radu Savopol and Lucian Badila (5 to go).

“In a world in which spontaneity, subtle irony and witty language are stuck and castrated into bombastic strategies and way too rationalized Facebook communication pillars, 5 to go was like a breath of fresh air to me and functioned as memorabilia for those said above,” said Laura Iane, ADC*RO member & Creative Director Pastel.

In this category, one distinction went to the campaign #SADAT, for OLX, by the team Dan Cretu | Senior Art-Director and Teodora Stefan | Senior Copywriter, from Saatchi&Saatchi + The Geeks. The TVCs presents the less happy endings for the undecided consumers that want to shop on olx.ro – and that find out that the perfect object for them has been sold.

A distinction goes to the anniversary campaign for Entrance – 10 Years of Fashion Drama. The videos posted on the brand’s Instagram account resume the states of the last 10 years of daily fight in order to be relevant on the Romanian fashion market and for becoming the first destination for the avantgarde fashion in Bucharest. The creative idea belongs to Alinei Gavrila-Bortun and Julien Britnic, from Gavrila Fashion Tellers.

And accolade in this category goes to the campaign Greetings from Bucharest for Lana Dumitru’s collection. The cloths are inspired by Lana’s personal childhood memories (the end of the 80’s and 90’s) and talk with irony and nostalgia about Romania of those times.
Together with the designer Lana Dumitru, Anne Ivan | Art Director & Julien Britnic | Copywriter and Mihai Barabancea (photographer), they succeeded in translating into the postcard format the collection’s humor and joviality.

5 to go and „More coffee less bucks” take the number one place in the OOH category as well.

The Work of the Month went to the campaign Puterea jocului, through which OMO, alongside Momentum Romania, explains the parents that the freedom at play is very important for children’s growth. The limits such as „stai in banca ta” (stay on the bench), „nu te murdari” (don’t get dirty) or „esti prea mic” (you are too young) stop the children from enjoying their play. The creative team was formed of: Calin Marcu, Javier Gelpi, Anamaria Benchea, Diana Voinea and Paul Paun.

“OMO – Puterea Jocului or when a brand assumes a social role and actually „walks the talk”. The campaign is built on the already existing brand’s communication (murdarirea este buna – getting dirty is good) and brings further the idea in education and the education to parenting, other social hot topics. I liked the style of the manifesto that didn’t fall in pathos and the campaign on the website supported by believable specialists and partners, with actionable points and practical pieces of advice. It’s a campaign that even it may not change the way in which us as a society are educating our children at least it attracts the attention towards some behaviors and social stigmas that, unconsciously, we are perpetuating. And not least, it’s a campaign that tights beautifully the manner in which a purely commercial product can have an emotionally-educative impact in our life,” said Ruxandra Matache, Group Creative Director Friends\TBWA & member ADC*RO.

OMO and the campaign Power of the game takes the number one place also in the TV category.

Tight at the number one spot in Digital are the campaigns #BlindBoxChallenge and Blocul #faracash.

Asociatia Nevazatorilor (The Association of the Blind) and the agency Cheil | Centrade took advantage of the big wave of challenges during the launch of the Bird Box movie– when a group of people got blind folded just as the movie characters did and were trying to do different daily activities – and came up with the idea of a  #BlindBoxChallenge in which it presents the fight of a blind person that always faces this challenge. The team: Andrei Constantinescu | Art Director and Robert Ghita | Copywriter.

On the same spot is Blocul #faracash – a campaign created by McCann Worldgroup Romania & MRM // McCann Romania for Mastercard. The payment methods are going to the next level and Mastercard proposes the payment with the card for the apartments’ maintenance. Therefore the TVC presents an ideal flat in which the administrator comes with a POS that allows the lodgers to pay their utilities with the card. Raluca Circo | Art Director & Andrei Mihailescu | Copywriter (McCann) and  Ionut Raicu | Art Director & Madalina Pop | Copywriter (MRM //McCann) are the people that had the creative idea.

The category’s accolades go to:

United Way and the campaign Alegeri imposibile (Impossible Choices), through which Mario Francisco | Art Director, Alex Zamfir | Art Director & Viorela Turcu | Senior Copywriter, from the agency Tuio, present a worrying fact in Romania: many children are forced to stop their studies and abandon school for the basic needs in the household: the growing of the small brothers, the household chores or the one time services as a source for money.

The other accolade of the category is for the campaign #ImpossibleLove for Samsung, created by Roxana Nita | Art Director and Adina Stanescu | Copywriter, from Cheil | Centrade. #ImpossibleLove presents on Valentine’s Day an atypical story between two virtual assistants such as Romeo and Juliet, part of some different operating systems. The main character is Bixby – Samsung’s virtual assistant, that proves to all that love is not impossible, no matter the situation.

The accolade goes to the launch of the cultural website Scena9 also on paper. Therefore the creative team si formed of Alina Gavrila-Bortun and Dan Popov  | Copywriters & Dragos Botcau and Julien Britnic | Art Directors, from Gavrila & Asociatii, used the outdoor context in order to parody the communication of some popular products – massively present in this environment: detergent, cereal box, toothpaste, biscuits, etc. –  with a cultural twist regarding the themes in the magazine.