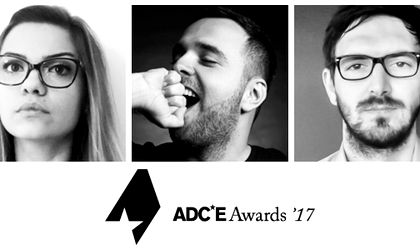 This year, the ADCE Awards’ judging session will be overseen by new ADCE President Ami Hasan. On his first year in the role, Hasan said: “In the increasingly competitive business climate, agencies are under more pressure than ever to deliver for clients – especially in Europe – a powerhouse of creativity. In my first year as president I’m asking European creatives to demonstrate that they’re more valuable than ever; we know the work is out there, let’s show it to the world.”

Creatives from digital innovators Typeform and Google Creative Labs will judge alongside independent agencies such as KOOR, WILD and Vintage. Networks including Jung von Matt, Leo Burnett and M&C Saatchi provide the heavyweight presence. Countries represented stretch across Europe, from Iceland to Cyprus, Finland to Portugal.

On the juries, Hasan said, “The selection of judges represents previous winners and current trend-setters from a diverse array of nations. No other awards show in the world attracts talent from such a broad spectrum of independent and network agencies. We’re blessed with a magnitude of talent in Europe, and ADCE Awards will be a celebration of that talent.”

In November, Hasan will be joined by the following Jury presidents:

In total, 62 leading creatives and designers have been selected from 22 European countries to judge. In November, the juries will meet to debate the best creative work from across Europe, before awarding Gold, Silver and Bronze across each category, as well as the overall Grand Prix, to be revealed at the ADCE Awards Gala on November 11. The full list can be found at the ADCE website.

Submissions should be made online at http://adce.submit.to before October 6.

The ADCE Awards return as part of the European Creativity Festival (November 9-11) at the Disseny Hub Barcelona. This year’s theme will be “Imagineering Creative Intelligence”, and has been curated by Kris Hoet.