Superbrands Romania gets festive: the 10th edition for Romania has started 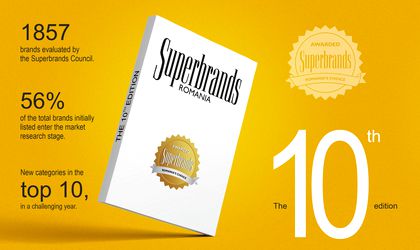 Superbrands, represented on the local market by the strategic communication agency BDR Associates, announces the start of the 10th edition of the Superbrands Program for Romania and the successful completion of the first stages. This year, the Honorary Council includes 30 professionals from different industries, such as management, marketing, advertising, communication, branding and media, consulting. The Superbrands partner for market research is Ipsos, as in previous editions.

The list finalized by Ipsos for the first phase of the program included 1857 brands, from 65 categories, which have been considered eligible for the status of Superbrands. Following the vote of the specialists from the Honorary Council of the Superbrands Romania Program, 1040 brands, representing a percentage of 56% of the total listed brands, qualified for the second stage of the selection, namely the market research among consumers. The criteria taken into consideration in the selection process were reputation, trust, quality and market differentiation.

Following the judging carried out by the Honorary Council, a list of the top 10 categories that enter the second stage of the current edition emerged, namely: Bookstores & Office Supplies; Gum & Candy; Gaming & Entertainment; Restaurants, Fast-food Chains and Coffee Shops; Meal Tickets; Hotels; Baby Food & Beverages; Personal Care; Accessories; Festivals. The ranking shows that the Bookstores & Office Supplies field, as in previous editions, remains the leader of the categories that entered the evaluation process, having the most brands selected for stage 2, compared to the number of brands listed in stage 1. There are also some changes most likely influenced by the atypical conditions of last year. The Gaming & Entertainment area is also kept in the top, going up by three positions, compared to the previous rankings, being a field that has grown and been positively influenced by the pandemic. Restaurants, Fast-food Chains and Coffee Shops represents another new category that entered the top 10, a remarkable repositioning compared to previous editions, in which it was towards the end of the ranking. Although they were closed for much of last year, restaurants have grown in the delivery area.

In this year’s edition of the Superbrands program, several new categories were introduced, namely, Festivals, Real Estate, Social Media, Accessories, as well as Mobility. It is noteworthy that the Festivals were ranked in the top 10, the explanation being given by the fact that in recent years this field has become an industry, has grown exponentially and has become very popular. Even if, in the context of the pandemic, many festivals did not take place last year, it is viable the probability that their placement in the top 10 happened against the backdrop of nostalgia. The presence in the top of categories such as Restaurants, Fast-food Chains and Coffee Shops, Hotels and Festivals, bring to attention a certain mood regarding a lifestyle that we have been deprived of due to the pandemic.

Regarding other categories, located outside this top 10, Audio / Video Streaming stood out, being in a more advanced position compared to previous editions, which confirms the continuous rise of the industry.