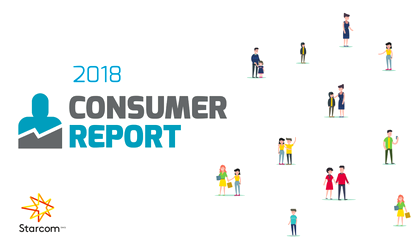 Starcom Romania follows and analyses Romanians’ consumer behavior in terms of their content consumption, practical activities, buying behavior and use of technology, in order to understand them in all their complexity and offer them more relevant experiences. At its fifth edition, the Consumer Report centralizes and sums up all this information.

The study divided consumers into four categories, based on their lifestyles: Families with kids – families that take care of children up to 14 years old, most of them between 18-45; Teens – students aged 14-17; Single Youth – aged 18-34; Families without kids – the majority of the family’s members are over 45 years old and don’t have children younger than 14 years old in their care.

Romanians in urban areas prefer to watch traditional TV, which has had a constant evolution in the last years. Online video content consumption recorded a small growth in the last years, reaching 40% in urban and 70% among Teens, respectively 73% for Single Youth. We’re seeing a growth trend among Families with Kids as well, but that it hasn’t changed during the last two years.

We can see an upward trend among all the segments that have a Smart TV at home, especially for Families with kids, probably because they need to interact in the media content consumption and use apps and online platforms available on this type of device.

What are the preferred devices for the time spent online?

Despite the fact that most of the respondents access the Internet via the PC (Desktop/ Laptop), online content consumption on these devices is decreasing, while the time spent online on the mobile phone is growing year by year. This change in consumption can be observed especially among the young segments (Teens and Single Youth).

Recently, the usage of tablets has decreased among Families with kids and Teens, as the new generations are more familiar with smartphones.

Mobile phone use – how many Romanians in urban areas own a smartphone?

Smartphone ownership is on an upward trend with an accelerated growth among the Families with kids category and with the biggest adoption rate among Teens and Single Youth. In 2018, more than half of the urban population was using a smartphone.

What are the social networks Romanians prefer?

Facebook is by far the most popular social media channel, with a significant growth rate among the mature segments (Families with or without kids), during the last year, while among the other segments the consumption has stagnated. The young segments (Teens and Single Youth) continue to be the most active on the majority of the social media platforms, especially Instagram, which is visibly growing every year.

Gaming on PC or console is a decreasing trend, even for the segments Teens and Single Youth. They have replaced these two devices with mobile phones and online games: 52% of Teens and 40% of the Single Youth use mobile phones for playing weekly (source: SNA Focus 2018). The conclusion is aligned with the global trend of mobile games consumption, the segment with the biggest growth in 2018, with a volume of USD 25 million (statista.com).

Music CDs and USBs aren’t popular anymore, as the consumption of offline audio content has had a continuous decrease since 2016 across all the segments. There has been a growth in the consumption of audio online content, both at the level of the entire urban population, as well as among the Teens and Single Youth segments, especially in 2017.

How popular are festivals among Romanians?

In 2018, the segments Teens and Single Youth had the largest participation rates in events and festivals throughout the year. Still, there was a small decrease compared to the previous period in Teens’ participation.

A segment where there was a growth in event participation is Families with Kids, considering that these festivals or concerts are the right experience for the little ones.

A downward trend has been recorded, both online and offline, starting 2017, for all segments. It comes as a consequence of the informative role that social media has, which is growing significantly. Books have maintained a constant, but low level. Teens are buying books at the same rates as they buy newspapers and magazines.

All the analyzed segments have started to lose their interest in sports. In 2018, only 1 in 10 respondents in urban areas said that they would pay to see a football match. Sports have lost their glam even as an entertaining activity: Teens and Single Youth are the most likely to play football online (FIFA), and less than 15% play football outside at least once a year.

Buyers’ behavior and the importance of brands

In 2018, 1 din 2 teens chooses a product based on its brand, and this decision is caused by the fact that teens believe that the brands they use must represent them.

During the last years, the Influencer’s role has been growing in the consumer’s buying decision. For the Teens, celebrity endorsements are important through the trust they offer a brand or a service. Their influence is slightly up among all the segments analyzed.