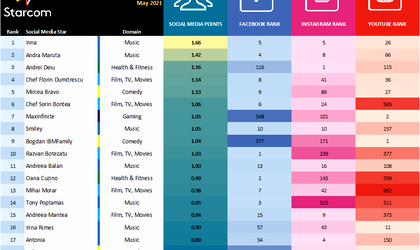 According to the Social Media Stars Index, conducted by Starcom Romania, the level of engagement of content creators’ communities decreased on Instagram and Youtube, while on Facebook it increased in May 2021 compared to the same period last year. This month’s top also comes with novelties in terms of its composition, one of the most notable being the fact that Inna returns to the first place.

George Mușat, Head of Business Analytics, stated: “May 2021 is in line with the trend started after the quarantine in the spring of last year: the decrease of the activity of both content creators and their fans. With one exception, though. Facebook, which has an important writing component, is the platform that encourages people to express their opinions and debate the ideas they support. For Instagram and Youtube, more visually oriented platforms, this component is blurred. Facebook is also the only social platform that offers the opportunity to share content, so people have been able to share information they find useful.”

Three major trends regarding the level of engagement

As for Youtube, the decline is even steeper: 48% in terms of fan engagement and 76% in terms of content consumption. If in May 2020 the posted content was watched almost 720 million times, a year later the number of views dropped to almost 175 million. Over 85% of this decrease can be attributed to the Gaming category.

On the other hand, Facebook, the social network preferred especially by people over the age of 35, recorded an increase of over 50%. This increase was mainly due to the boost in the number of reactions and comments (from just over 20 million to over 28 million reactions and from 1.2 million to almost 1.7 million comments), while the number of content shares was kept relatively constant, at around 1.3 million.

Inna, again on the first place in the general top

Inna returns to the first place of the top, but it is noteworthy that she does not hold supremacy on any social network. In second place is Andra, who thus fell a position from the previous top.

Răzvan Botezatu holds the first place on Facebook, mainly due to his intense activity, but also to the fact that one of his posts gathers no less than 95,000 comments. However, he does not achieve the same performance on other social networks, so this month he holds only the 10th place in the general ranking.

Andrei Deiu’s Instagram account has evolved rapidly in the last year, gathering 46% more fans compared to January 2020, reaching over 4.4 million followers in May. With average performances on Facebook and Youtube accounts, Andrei Deiu ranks third in the overall top.

Bogdan Iordache (aka Bogdan IBMFamily) manages to reach the 1st place in Youtube, having the posts with the most reactions, over 660,000, but also with an impressive number of comments, over 21,000.

Novelties in the top

With the reaching of the upper phases of the cooking show Chefi la cuțite, the social media accounts of the three jurors have major boosts: Chef Florin Dumitrescu ranks 4th in the top (being the only one who has an active Youtube channel), Chef Sorin Bontea is on the 6th place, and Chef Cătălin Scărlătescu is on the 36th place.

Irina Rimeș is for the first time in the top, propelled directly on the 11th place in Youtube by the song “We don’t have time”, which has over 3.7 million views.

In addition, this month’s top marks another first: the absence of Adelina Pestrițu from the top 20 content creators. This is due on the one hand to her lower activity in the last 6 months, the peak being reached in July 2020, but also to the decreasing interactions of fans with the content posted by her.

The leader of the general top, Inna, leads the ranking in the Music category as well.

In the Fashion & Beauty category, the first place is held in May by Andreea Raicu. In second place is Ioana Grama, followed in third place by Dana Rogoz. Previously, the top position was led by Adelina Pestrițu, who has now fallen to fourth place.

The number 1 TV star is Chef Florin Dumitrescu, propelled by the show Chefi la cutite. He is followed in the top by Chef Sorin Bontea, in turn benefiting from the exposure offered by the TV show, and by Răzvan Botezatu, on the third place.

Mircea Bravo remains at the top of the Entertainment category. Instead, Selly drops to third place, with the second place now occupied by Bogdan IBMFamily.

In the Cooking category, Gina Bradea occupies the first place, being followed by Laura Laurențiu. In third place is Jamila Cuisine.

The presence of each person on social platforms was scored according to two criteria: the size of the channel / page and the engagement of the fans. For a balanced representation of the three social platforms, each indicator was calculated by relating each dimension to the maximum of the platform.

The ranking of the accounts on each platform was made by summing the engagement index with the large one and relating it to the maximum number of points of the respective platform. In this way, the index of each platform had a weight of 1/3 in the final index.

The calculation of the total index was performed by summing the indices for each platform where the person is present.