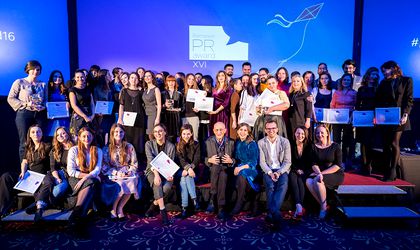 Rogalski Damaschin Public Relations was designated the Romanian PR Agency of the Year at the 16th edition of the Romanian PR Award, which announced its winners during a gala that took place at the JW Marriott in Bucharest.

“It is the third time in our career when the Romanian PR Award jury selects us to be the Agency of the Year, adding an extra reason of joy to our 10-year anniversary. This autumn marks 10 years since we first aimed to create positive social and economic impact and I believe we’ve never strayed from this promise. For the 3rd Agency of the Year title, we didn’t have to reinvent anything compared to 10 years ago: each time, we presented to the judges substantive campaigns, built around people’s legitimate interest for living a better life. We held and we will continue to hold to this promise which, for us, is a fundamental identity element. I would like to thank our colleagues, clients, partners and also our critics for helping us remain “good advocates”,” said Eliza Rogalski, Strategy Director & Managing Partner Rogalski Damaschin Public Relations

“The most difficult in communication is, perhaps, to remain relevant on the long term, to have substance, courage, a high dose of realism and a grain of idealism. Each year and with every project, we are looking to open new perspectives and create ideas to bring a real value to the businesses belonging to our clients. We are managing to do so because we have close an extraordinary team, our colleagues, people with passion and energy enough to move mountains. I want to thank them, to the clients, to our extended family, industry partners and colleagues for what we manage to do together. Congratulations to all!” added Alina Damaschin, Creative Leader & Managing Partner Rogalski Damaschin Public Relations

The Communicator of the Year trophy was awarded by the jury to the founders of Daruieste Viata Association, Carmen Uscatu and Oana Gheorghiu.

“The duo formed by Carmen Uscatu and Oana Gheorghiu brings out from the cliche area that “it is possible” that, in today’s Romania, we hear said as a whisper or with doubts, excessively and without a real basis. Carmen and Oana are proving that a hospital for the cancer suffering children can be built, despite authorities and replacing them. They do for Romania what the state institutions should. Because they have no time to waste. One can fight bureaucracy and give hope at the most concrete way. They are assumed, they are powerful and they are an example because civil society is a living organism, ready to fight. NZ They aren’t only building a hospital, they build trust and a public discourse on what will and solidarity are as a way of existing,” said Ana Sișu, Juror Romanian PR Award.

The 16th edition of the competition was supported by an international jury with representatives from US, UK, Germany, Italy, Sweden, Czech republic, Netherlands, Serbia, Russia and Romania.