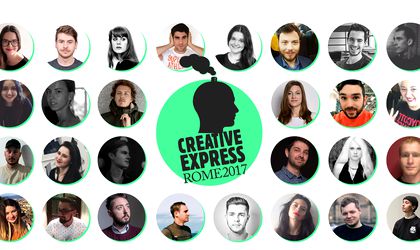 The Creative Express program takes place this year at Pi Campus in Rome. The event, organized by the Art Directors Club for Europe (ADCE) in collaboration with Pi Campus, takes place May 18-19.

A true tour of Europe, previous Creative Express stops have included Helsinki, Munich and Vienna. Every edition brings together the continent’s best young art directors, copywriters and designers to tackle a real-world business challenge in a classroom like no other.

The Creative Express Rome will be the first to focus on startups: Pi Campus is a startup district and a venture fund that invests in global talent. Describing the innovative location for the event, Pi Campus founder Marco Trombetti said, “We love state-of-the-art technology applied to disrupt big slow moving industries. Artificial Intelligence is in our DNA but we love founders that add design and art to bring emotions into technology products. We invest in startups designed to be global. Italy is where our heart is.”

Together with Creative Express director HP Albrecht, Trombetti will challenge 28 young creatives to develop a communication campaign aimed at inspiring designers around the world to found a startup over just two days. The final projects will be presented to a daunting audience of 100 people from the industry.

The up-and-coming stars have been selected from 14 European countries, nominated by their respective ADCE member clubs. To be included, they must be under 28 years of age, English speaking, and have a minimum of 2 years of professional experience. The 2017 cohort is:

Co-funded by Creative Europe Programme – created by the European Commission to fund development of the creative and cultural sectors – the event forms a key milestone in the ADCE’s remit to provide professional training and to promote young European creatives.

The Art Directors Club of Europe (ADCE) is a not-for-profit association headquartered in Barcelona comprised of 20 professional clubs and associations of graphic design and advertising from 19 European countries: Austria, Cyprus, Croatia, Czech Republic, Estonia, Finland, Germany, Georgia, Iceland, Italy, Portugal, Russia, Romania, Slovakia, Slovenia, Spain, Switzerland, United Kingdom and Ukraine. Founded in 1990, the ADCE strives to foster excellence in graphic design and advertising creativity at a European scale. The association represents more than 5,000 professionals from the field and internationally spotlights the best works accomplished at a local scale through its annual European awards.