Romania is the guest country at Vienna Design Week 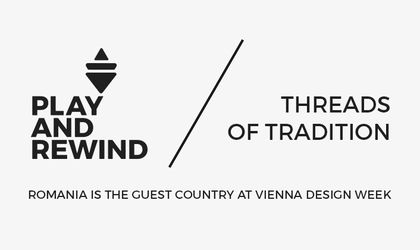 The Romanian Cultural Institute, in collaboration with Romanian Design Week, organizes between September 29 and October 8 two contemporary design exhibitions that are part of the program Romania – Guest Country at Vienna Design Week 2017: Threads of Tradition and Play&Rewind.

The exhibitions reunite works of over 40 Romanian designers and present one of the best projects in Romanian contemporary design that have been created in the recent years, coagulated around two curatorial concepts signed by Romanian Design Week.

„We are congratulating the Romanian Cultural Institute for succeeding in obtaining the privilege that Romania is invited as guest country and we are honored that we are also involved in handling this presence. The two exhibitions presented by RDW in this context represent a valuable promoting instrument for the Romanian designers that are part of it, but also for Romania and for the potential that the creative industries have in its developing,” said Andrei Bortun, CEO The Institute.

The presence of the Romanian design during one of the most prestigious design events in Europe comes as a result of the efforts and relations of the Romanian Cultural Institute from Vienna and Romanian Design Week have been developing during the years with the organizers of Vienna Design Week. Therefore, after more visits that the Austrian organizers made in Romania at Cluj, Timisoara and Bucharest, Romania received the status of guest country at Vienna Design Week. In the festival’s opening will speak: Thomas Drozda ‒ The Federal Minister of Arts and Culture, Constitution and Mass-media, E. S. Bogdan Mazuru ‒ Romania’s Ambassador in Austria, Renate Brauner ‒ representative of the Vienna City Hall for finance, economy and international business, Andreas Mailath-Pokorny ‒ representative of the Vienna City Hall for culture, science and sports, Gerhard Hirczi ‒ director of the Vienna Chamber of Commerce and Norbert Kettner ‒ director WienTourismus.

„It’s an important recognition that places the design scene in Romania among some of the most interesting in Europe at this time. The exhibitions presented in the last three years at ICR Vienna during VIENNA DESIGN WEEK have been highly appreciated, both for the quality of the design objects, as well as for the creativity of the curatorial concepts that are extremely different one year from another. I am convinced that the presence of the Austrian guests at the last editions of Romanian Design Week were very revealing and I wish that the partnership between the two festivals to open in the future new opportunities for the design in Romania,” commented Irina Cornisteanu, director ICR Vienna.