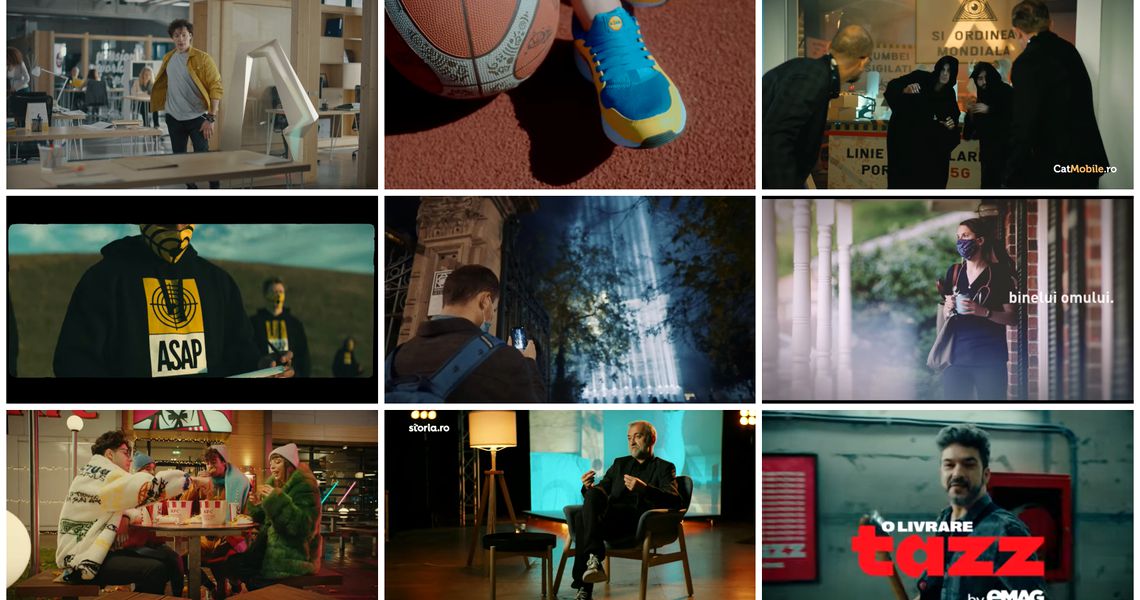 ADC Romania presents the best executions in Digital, TV, Print, OOH, Radio, Experiential/BTL and Graphic Design of November. The top covers the 18 winning campaigns from 13 agencies, freelancers and creative studios. The work of the month is the promotion campaign of the service NEO BT, signed by the agency Three for Banca Transilvania.

The project Banca Transilvania – NEO won in November the title Work of the Month and Number One place in the TV category for the TVC that expresses the harmony between the technology and the human. The creative team is formed of Andrei Tripșa & Sabin Staicu, from the agency Three.

„You. Technology. Harmony. 3 words, 3 punctuation signs. We must recognize that the simplicity is comforting. And as relevant as possible. When you take down the background noise to the minimum necessary you give the choreography and the music the chance to seduce. It’s as neonormal as possible”, said Marius Tianu, Freelance Creative and ADC*RO member.

Second place in the TV category goes to the campaign KFC Christmas Bucket for the 3 TVCs in which are presented the scenarios for taking lunch for the holidays at KFC: the offline scenario, the hybrid scenario and the online scenario. The team of the agency McCann was formed of: Mihai Constantinescu (Art Director) & Paula Ionescu (Copywriter).

The diploma went to LIDL for the campaign Sneakerii ĂIA de care vorbește toată lumea, created by Overskin Entertainment. The TVC presents the end of the teasing period and the fact that now #LidlSneakers can be bought from the LIDL stores. The creative team: Ștefan-Andrei Pop (Art Director) & Andy Daniluc (Copywriter).

First place was won by Catmobile and Sector 7 Hub for the campaign Noi doar punem întrebări, in which Oreste, Ionuț Rusu and Micutzu present the most common conspirations from that period. The creative team was formed by Alex Coteț (Director + Copywriter); Radu Nantu (Copywriter) & Alina Nechita (Art Direction).

The category’s second place goes to the campaign Hai să facem treabă, România!, created by Three for Banca Transilvania. The TVC presents, with the occasion of the Romania’s National Day, an atypic speech. The team that created it was formed of Andrei Tripșa & Sabin Staicu.

The third place went to the ASAP campaign, in collaboration with Subcarpați, dedicated to the signing of the ASAP Petition. The project is signed by the agencies Gavrilă&Asociații and Rusu+Borțun and highlights the need for the selective collection of plastic. The team was: Alina Gavrilă Borțun (Creation and Copywriting // Gavrilă&Asociații) & Miruna Macsoda (Strategy // Rusu+Borțun).

The accolades in the category go to:

The second place goes to the work Visual Playground 2020, created by Visual Playground and Sebastian Pren. The mural in the Universul Palace courtyard also won the first place in OOH for the mix that was meant to be in contrast with the grey shades of Bucharest.

The accolades in the category go to:

TypeThursday – for the project created by Bianca Dumitrașcu, and that also took second place in OOH.

Graphomat – FOI #3, work that covers Q&As with various illustrators and creatives or research over the posters and the editorial projects. It also took the second place in Print.

The third place goes to the project Documentary Mondays 2020, created by Daniel&Andrew for Centru Ceh.

An accolade in the category goes to Fiction Tuesdays 2020, signed for Centru Ceh by the creative studio Daniel&Andrew, in collaboration with Bianca Dumitrașcu. The event was dedicated to the commemoration of the director Jiri Menzel.

An accolade goes to the campaign Secom – Good Routine, by Jazz Communication. The creative team was formed by the copywriters: Valentin Suciu & Alexandra Mihuș.