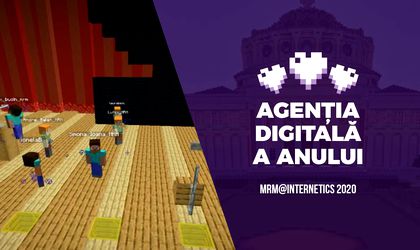 MRM Romania remains at the top of the local rankings, having won the title Agency of the Year for the fifth time in 8 years, during the Awards Gala of Internetics, the most important branding, marketing and online advertising festival in Romania.

At the same time, for the fourth time in 5 years, MRM Romania’s client, KFC, took home the Client of the Year title, having won 4 awards with 2 campaigns developed by the agency. The team was awarded a total of 8 trophies, including a Grand Prix, a Special Award, 6 Golden awards and 3 shortlists.

For the first time in its history, the festival- that yesterday celebrated 20 years of existence- the awards were handed out from a virtual stage, the entire ceremony being held in Minecraft.

“For me it’s an honor to win this title this year and to be recognised as the best both in terms of business and reputation. The recognition we have received for Technology and Content are very important to us, being two new business streams that our team has focused a lot in the past few years.” says Ionela Buta, Executive Director, MRM Romania

“Having the successful digital KFC campaigns awarded and looked up to, makes us even more ambitious to push our limits and develop new, fresh and innovative projects that will continue to combine technology, entertainment and online marketing in the same surprising way. In the past years we have consolidated our presence in the customers and fans’ minds through projects dedicated to the gaming community that have completed branded content campaigns that we have started to develop under the platform KFC Entertainment Channel. We are so happy to have been invited again on the Internetics Stage (even though it was a virtual one this year) to receive all the Golden awards we have won. But, by far, the most pleasing win this year is “Digital Client of the Year” together with “Digital Agency of the Year”, a win we share with our friends and partners from MRM Romania.” says Monica Eftimie, Chief Marketing Officer, Sphera Franchise Group.

“Celebration always finds a way”, I am borrowing something beautiful from our Teams’ group. For me this is the victory of an year that tried us all until we found ourselves pixeled in a virtual Atheneum, pressing the keys of the laptop in order to pick up our awards. We reconfirm ourselves as the representatives of the Agency of the Year by launching a fake candidate for presidency, alongside ROM, a client with whom we are each year redefining the courage in the industry. We evolved the tech and the format of the fourth social series, but we also had our first adventure in the faming territory and we did both in a very strong partnership with KFC. I believe that the sum of our ambitions and what we built together, agency and client, makes us the best in digital,” declared Ioana Zamfir, Creative Director, MRM Romania.

“The genius campaigns are born from the brand passion, its understanding and its purpose. Since 1964 ROM continues to bring strong sensations to Romanian, not only through the intensity of the taste, but also by the fact that it’s provoking us in different social contexts. The campaign “Toma Corunt” is a proof of courage, insanity and a little bit of desperation from Rom’s side in its challenge of reviving our civic spirit in exercising a fundamental freedom, the one to vote. It was a complex campaign, it involved a lot of work and generated stress for both sides, client and agency, but it brought to life daring ideas. Rom is a happy brand because has its destiny in the hands of passionate people that have their tricolor running through their veins. The recognition and the appreciation received at Internetics 2020 honor us, motivate us and complete “the school of life” that Toma Corunt was talking about,” commented Gabriela Munteanu, Head of Marketing Kandia Dulce.

“I’ve been dreaming and talking for the past 2-3 years of a Netflix for brands that produces content people want to stumble across in their feeds. Content that doesn’t resemble the classic advertising; one that’s selling firstly moral values and then introduces the products. Content that says stories centered around characters one can identify himself wit and then it’s sharing stuff about the brand. I am so happy to see this type of content being awarded at Internetics 2020.

KFC is the Client of the Year and won the title for a social entertainment platform that was built through the years.

ROM goes home with a Grand Prix for a campaign that resembles more an elections campaign than it does an advertising one. A courageous and ambitious campaign.

All this could not have been possible without a team, made from both client and agency, a truly united team. The Agency of the Year award goes out to the extended team!” says Ion Cojocaru, Head of Content, MRM Romania.