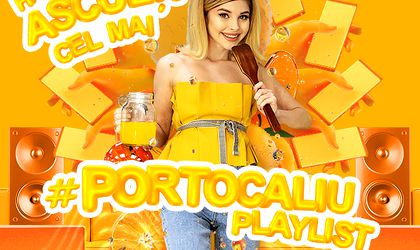 Mirinda Romania and L2 launched #MixUpYourHome, a digital incursion in different platforms, under the communication umbrella „Adauga #portocaliu lumii tale” (Add orange to your world). The campaign comprises a mix of tactics adapted to the social media channels, in 3 successive stages.

Starting from the situation in point, the image of a dystopian society, the brand proposes itself to offer the consumers fun and virtual get-together occasions, through digital innovation. The campaign adapts, in the limitative space #StamAcasa(WeStayHome), a creative user journey through Instagram, Facebook, Spotify, TikTok and AR experience, by proroguing the communities to find the optimism and to translate it in concrete actions.

“2020 is Mirinda’s year and I say it without any modesty because we have big ambitions and a great cross-functional team formed of passionate and innovative people for whom anything is possible. The campaign #MixUpYourHome marks a series of firsts in the communication in the non-alcoholic beverages category in Romania and a first step into the vast brand building process. This is just the beginning, therefore, stay tuned for more!” said Ioana Ciobotariu, Senior Brand Manager.

The campaign’s first stage involved the creation of the most orange collective playlist in Spotify, by using the recommendations of Romanians’ preferred staying at home songs, received through the Instagram and Facebook stories.  Lorena Visan, Sinziana Iacob, Adrian Pov, Andreea Remetan, Andrei Niculae, Emilian Nechifor, Irina Claudia and Iulia Andrei started the tag on Instagram in order to identify the songs that bring the state of good to Romanians.

During six days of campaign, the playlist has over 400 unique songs representing 30 hours of music and a follow base on Mirinda’s Spotify channel.

The second stage of the campaign involved an absolute premiere in Romania: a strong shift in TikTok, Mirinda started the first challenge launched by a brand in Romania on this platform. On the new TikTok page @Mirinda.Romania, the content creators on TikTok launched short videos, good in two, using songs that have been already selected in the playlist #MixUpYourHome in Spotify.

Louis Florea, Valerie Lungu, Marius Mlly, Cristina Negru started the chain reaction, using tools of effective engagement specific to TikTok: the duet and the reaction. During the second stage were over 100 duets and 20.5 million views.

The next level involved the integration of the Augmented Reality experience in the campaign #MixUpYourHome, using an Instagram filter. It is created under the shape of an AR quiz in which the communities are invited to identify the names of the music artists in the #orange playlist by solving a phonetic puzzle in the gibberish language, a hype digital slang in Instagram and TikTok for the Z generation.

In the first seven days of the campaign were registered 2 million impressions, over 400K users of the filter and 60K posts in story.

“The campaign #MixUpYourHome is one of the best examples of our principle test& learn in the Digital&Media department: the first Mirinda playlist on Spotify, the first Augumented Reality experience on Instagram and maybe the most important, the first brand campaign in Romania on TikTok, with banner and dedicated challenge page. Our bet is not only on one channel, but especially on the new generation of content creators. Both bets were winners and road openers,” said Laurentiu Ion, Digital Manager.

#MixUpYourHome is a campaign created by  L2, the agency chosen winner for the communication of the brands Mirinda, 7Up, Lemon Lemon, MountainDew, Gatorade, following a pitch done by PepsiCo, at the end of last year, and it concentrates on the interaction of the communities with the Mirinda brand through involvement and assumption, with accent on the share action, intensively used in all the three campaign’s stages.

“For Mirinda we did what we know best – a cumulative user journey through all that it means best content, likeability and trend right now that in the end gathers under an unitary concept results, reach, engagement, follow base and likeability in all the wanted networks and social media. We started the campaign having in mind the versatility and we used the hyppest anchors to generate more than just traffic, real involvement, content, assumed share,” said Mih Lovin, Partener L2.