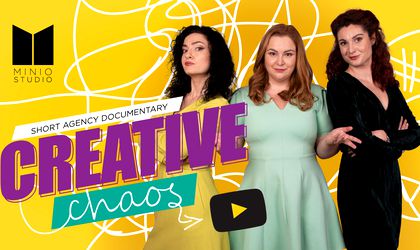 Minio Studio launches Creative Chaos – a short how it’s made documentary, that follows step by step the stages of building an ad campaign, from briefing to evaluation. The project involved all the participants from the campaign – the creative agency, the client, media agency, director, freelancers, influencers.

The video documentary shows the workflow in its real form – a creative chaos with stress, often on very fast pace, with multiple feedback rounds, but also with success, valuable collaborations and plenty of know-how. The narrative follows the campaign dynamic, showing individual worries and anxieties, as well as professional knowledge about handling a large project, with many layers and plenty of people involved.

The videos focus on Minio Studio internal workflow, but it also incorporates the clients and partners, from freelancers, to media and talent. There are no actors in this project, just regular people that played an active role in the campaign development – which makes this initiative even more outstanding though its honesty and vulnerability.

Creative Chaos is the fist project of its kind on the local market. Though this production, Minio Studio plans to showcase that advertising is not just about brainstorming

and cool creative ideas. Advertising is also about getting results though hard work and careful planning on multiple layers, from strategy, to AV Production, to media and trade marketing.

„This feels very personal. I have seen it as a mix of vulnerability and professionalism. Life in advertising is full of adventures, stress and difficult interactions. But it also means working alongside amazing people, it means being creative, finding strategic solution on the spot and, in the end, enjoying the results. No matter how discipline we work, there are always new situations that require you to adapt. And one can see this in Creative Chaos, which represents us so well because we are a team of creative problem solvers”, declared Ioana Mucenic, CEO Minio Studio.

The first case study of the series presents on the projects developed under Minio Studio leadership: TOP Snack, a succesful project developed for Mondelēz and Macromex. With the internal code name Trio/Snackology, the campaign came with the creative challenge of combining three different brands in a relevant manner (Tuc, Oreo, Philadelphia).

The Creative Chaos series will include multiple campaigns, presented in short 3-4 minutes episodes. One can watch the show on minio.ro, with one new episode being launched each week.