Initiative: The Romanian media market to reach EUR 455 mln in 2018 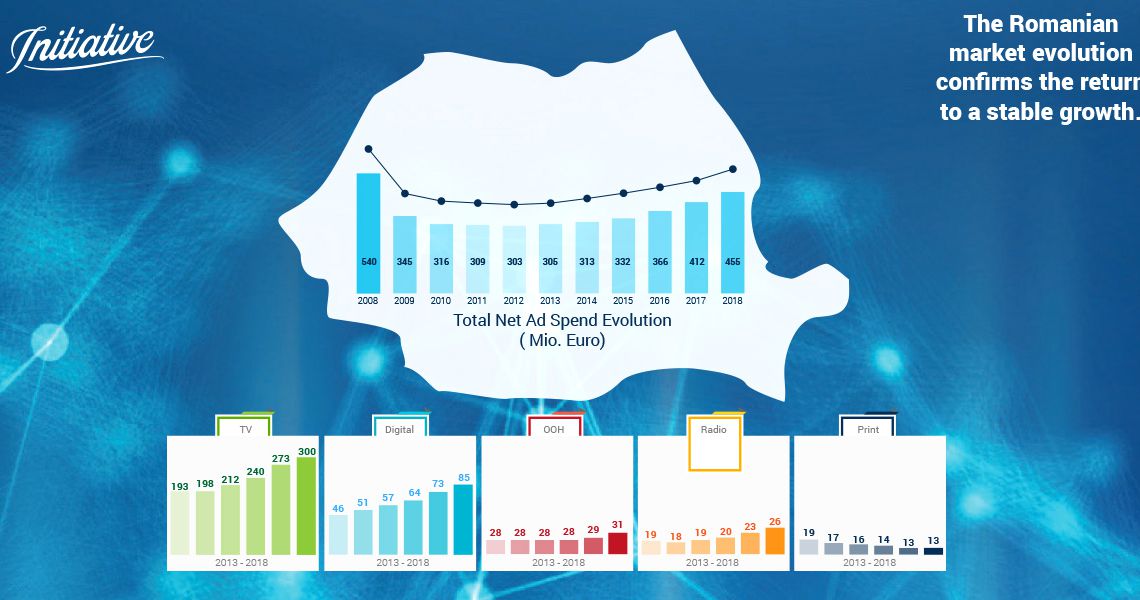 The Romanian media market registered a new growth of 13 percent in 2017, up to EUR 412 million, according to the new Media Fact Book report, done by the agency Initiative. This represents the biggest growth since the crisis and that brings the local media market closer to the 2008 level.

„The per capita media consumption in Romania continues to be way under the global and European average rate, therefore there are the premises for a sustainable growth of the advertising volumes in Romania in the following years, on the background of positive evolutions of the economic parameters that influence the population consumption. It is encouraging the fact that both the multinationals, as well as the local companies started to invest more in the new brands and product innovations. The growth is alimented also by the entrance of new clients and some new categories of investors on the local media market,” said Alexandra Olteanu, managing director, Initiative.

As in the previous years, the evolution of the market is supported by an accelerated growth of the TV that will continue to dominate the advertising budgets, with a share of 66 percent. Therefore, in 2017, TV registered the biggest growth since 2009 – 14 percent compared to 2016, up to the value of EUR 273 million.

The other channels – online, radio, OOH – conformed the ascendant trend, with the exception of print, that continued to drop on a moderate rate.

The online grew last year with 14 percent, up to EUR 73 million, having a market share of 18 percent. Google and Facebook continue to dominate the digital market, with a share of 66 percent, in the context in which the Internet penetration rate grew by 3 percent in 2017.

On the respect of the online activities, the search for information and online games remained at a stable level, the use of the e-mail dropped, while accessing social networks and the consumption of video content grew. At the same time, the transparency and the safety of brands were important themes in the online of 2017, preparing the field for the entrance of the GDPR in 2018.

With a market share of 7 percent, the OOH reached EUR 29 million, with a growth of 5 percent, the first in the last years. This is supported by significant and constant investments done by some companies in industries such as retail, banking, FMCG and telecommunications.

The biggest growth of last year was registered by the radio, up 15 percent to EUR 23 million. This channel maintained a market reach of 6 percent, the audience being stable each year because the consumers are loyal to a daily routine of radio consumption.

On the other hand, the difficulties in the recession period continued to have a negative impact over the printed media that dropped in 2017 with 5 percent, up to EUR 13.4 million, with a market share of 3 percent. While it concerns the top advertising investments in 2017, just as last year, the biggest budgets were allocated by the companies in the pharmaceutical industry, followed by mobile telecommunications, cosmetics, personal care and cleaning. The investments in retail, electronics and appliances and sweets grew, while the budgets in beer, auto and dairy dropped. The providers’ investments of banking and insurance remained stable, while the fast food restaurants entered in the top categories.