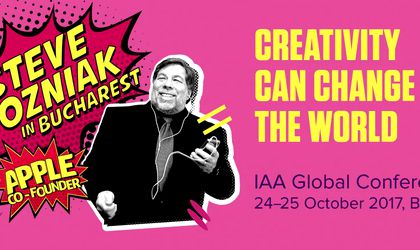 Two full days of unrivalled inspiration: that’s the aim behind the 2017 IAA Global Conference “Creativity Can Change The World”, as the full agenda is revealed.

A “start-as-you-mean-to-go-on” kick off to the event with Robbie Douek, Vice President, The Walt Disney Company, followed by Jacelyn Swenson from IBM. Swenson, Head of IBM’s Branded Content and Global Creative Team, who was part of the team that designed the world’s first cognitive dress, will talk about Using Creativity to Connect.

Shun Matsuzaka, founder of McCann Millennials will share his experience on co-creation and how can we use technology to boost human creativity. He’ll be joined on stage by a robot! Marco Cremona, Creative Lead at Google London, will follow, with an intriguing topic: Communicating in the Goldfish Era.

The “Creativity and Technology” panel will include:

The second day of the Conference will focus on how creativity can improve practices in the educational and post-graduate academic system. The IAA has taken an integral role in the industry’s future through many innovative initiatives to educate, train and attract the advertising professional of tomorrow, and this commitment continues at the 2017 IAA Global Conference in Bucharest.

The “Creativity and Education” panel will include:

Cristian Hatu, Chair Person Center for Assessment and Educational Analysis, will talk about making mistakes when you’re a student – why’s mistakes are actually OK, what can they teach us. He will be followed by James Murphy, co-founder of Adam&Eve DDB, Deirdre McGlashan, Global Chief Digital Officer MediaCom and Valer Hancas, VP Global Compact Network Romania.

And as we look to conclude the event, we’ll do so with a conversation that will leave delegates with much food-for-thought: a superb chat between Tom Standage, Deputy Editor The Economist and the WOZ, Mr Steve Wozniak, co-founder of Apple and the inventor of the personal computer as we know it today.

The IAA Global Conference “Creativity Can Change The World” is organized by the International Advertising Association Romania together with the Bucharest Main City Hall, through ARCUB Cultural Center.