Farmec gets awarded for most efficient promotion campaign at special ceremony 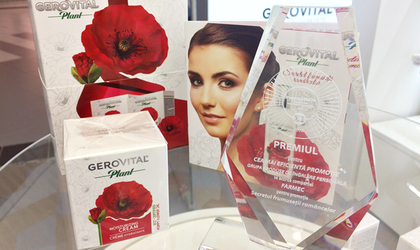 Comestics maker Farmec discovered “The secret of the Romanians’ beauty” and won the award for the most efficient promotion of 2016 at a special ceremony organized by Piata magazine.

The category where the Cluj-based company was declared winner was one of the first three most competitive ones and had the biggest number of companies vying for the awards.

The promotion “The secret of the Romanians’ beauty” took place in 4 steps, in the period March 1 – May 25 and was developed both in hypermarkets and the traditional commerce, in over 1000 locations. The clients bought products Gerovital Plant and the ones that got photographed with the Poppy Flower, the symbol of the new range, were rewarded with prizes in cosmetics created by the Farmec, as well as other presents.

“This distinction represents the fact that Gerovital represents the Romanian excellence in cosmetics both from the quality of the products and the special relationship that we have with our consumers and business partners, those being built in time through this type of creative and generous promotions,” said Ioana Borza, marketing director at Farmec.

According to the data provided by the research company Nielsen, Gerovital is the number 1 brand in Romania in the category Face Care and also, this year, the brand took the number one spot in the top BrandRo “100 most powerful Romanian brands”.